A snapshot from days gone by 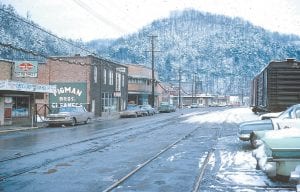 Former Whitesburg Appalachian Regional Hospital physician John Engle snapped this photograph when he was living and working in Whitesburg in the winter of 1964. Pictured is the west end of Main Street formerly known as Railroad Street before the CSX Corp. pulled out the old L&N tracks. Beginning is the old East End Market grocery, Pigman Brothers Dry Cleaners, Auto Parts Inc., KYVA Motor Co., and the Suburban Motel. The structure seen in the distance above the Suburban was the screen belonging to the old Elinda Ann Drive-Inn Theater that was located where Dairy Queen and the Letcher County Recreation Center now sit. The boxcars on the right were in front of the former Lewis Wholesale Building, which now serves as Whitesburg City Hall. We thank Dr. Engle for leaving a copy of the photo with us during a visit this past June. (Photo courtesy John Engle)