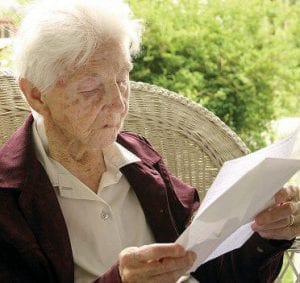 Gaynell Begley was photographed at her home at Blackey doing what she liked to do best – reading. (Photo by Phil Primack)

For Gaynell Begley, home and peace literally swung at the end of the long porch of the store in Blackey that was run for decades by her father, C.B. Caudill, and then by Gaynell and her late husband, Joe Begley. Whenever she was able to catch a break between customers and visits from friends from all over the lower end of Letcher County, Gaynell would head for the metal swing that hung from the porch roof, next to lengths of culvert, black plastic tubing, an old railroad switch and the wonderful clutter of other store supplies and memorabilia.

The swing could hold two people – barely – but Gaynell was content to sit by herself and read. Sometimes she’d just ponder the trees or the river across Route 7 in front of the store. Sometimes – and these were special moments for anyone lucky enough to have had them – Gaynell Caudill Begley would softly talk about the mountains, about her family, about the news of the day, about challenges facing eastern Kentucky, or about things not nearly as weighty but which she just as eloquently observed.

For all her life, Gaynell Begley was both a student and a teacher. She studied everything, but never felt the need to impress people with what or how much she knew. The teacher in her, however, was always eager to share insights she’d gleaned from some book she’d just read – Gaynell was always reading – or from a letter or from a friend or customer – actually, customers and friends were generally the same people. Of course, those C.B. Caudill store conversations could sometimes be a little hard to hear if Joe Begley was also holding court on the porch. Joe’s Abe Lincoln looks, boisterous style, outspoken views and powerful personality made him and the store a magnet for visiting journalists, college students and others. Gaynell enjoyed meeting these folks, but she was perfectly willing to be in Joe’s shadow. While she would often chuckle to herself about some particularly outrageous Joe comment, she would mostly leave the talking to him (truth be told, it was kind of hard not to leave the talking to Joe).

That was a loss for the visiting listeners. Joe had important things to say, and he said them clearly and well. But friends and regular visitors – even Joe himself – knew that Gaynell’s wisdom was the finishing polish for Joe’s bluster. Sometimes you’d have to draw it out of her, but in a clear sentence or two, Gaynell could offer more insight and perspective than any windy article by any outside reporter, including me. So while Joe would be on the porch mesmerizing some touring group, Gaynell would remain behind the counter, literally taking care of business, part of which was to always check on how folks were doing on Elk Creek or Carcassonne or at any of the other places for which the C.B. Caudill store was once both a place to shop and a place to be.

Back in the 1970s, I lived in “the little house” behind the store while working for The Mountain Eagle. Gaynell would keep me well supplied with ice cream sandwiches, but more importantly, she and Joe kept me fully informed of newsworthy developments. At the time, Gaynell wrote for the Eagle, reporting the news from Blackey. From her perch behind the counter, no one was in a better position to do so. Sometimes she’d jot down notes during breaks between customers. Other times, she’d do her writing in the little room separated by a curtain from the main part of the store. Photos of her children and other family members dotted the room, along with newspapers, magazines, Joe’s pocketknives and other toys. It was in that room that Joe and Gaynell finally heard the news from faraway Japan that their daughter Jane had given birth to their granddaughter Nikki, who is now a mother herself. That phone call – so long before the Internet – lit up the darkness of a fall night.

Over the years, business at the store would slow. Today, the swing is still and the porch empty. While she worried some about the store’s decline, Gaynell enjoyed having more time more time for reading, for visiting and conversation. Talk would become more difficult for Gaynell, as illness robbed her ability to articulate her thoughts. That was an especially cruel turn for someone with as much to say, and to say well, as Gaynell. Also enormously frustrating for her was the growing difficulty she faced in writing. “Believe it or not, it took me two hours to write just this little bit,” she wrote in one of the last postcards I received from her. Which made me appreciate the note and its writer all the more.

Not that long before she had to move into the Letcher Manor Nursing Home, I drove Gaynell to Elk Creek to visit with Pascal and Louise Dixon, friends for decades and relatives by marriage. By then, Gaynell knew that she could no longer get the words in her head out of her mouth. It clearly still bothered her, but she was happy to be with people she knew and in a place she loved. And she was still very much part of the conversation. So what if she could not articulate them – you just knew that Gaynell Caudill Begley had some pretty fine things to say. She always did.

She was a special friend and teacher.