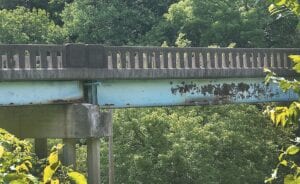 BROKEN CONCRETE AND RUSTED STEEL support the Redstar Bridge on KY 7 South near Ulvah. The state has lowered the weight limit for the bridge to 3 tons, effectively closing it to large trucks and school buses. (Photo by Sam Adams)

Crossing the Redstar Bridge can be a stomach-churning experience in the best of times.

The two-lane, steel-truss-and-concrete bridge soars 80 feet above the North Fork of the Kentucky River and the CSX railroad tracks on the riverbank. It’s 411 feet from end to end and the longest of the five spans is 150 feet between support piers. Potholes often turn it into an obstacle course and it trembles under the tires of heavy trucks.

School buses crossed the bridge for decades, but this fall children traveling KY 7 from the Ulvah/Linefork area will have to find another way to get to class.

The state Highway Department has declared the Redstar Bridge unsafe for any vehicle that weighs more than 3 tons, effectively closing it to school buses and commercial vehicles. While money is budgeted to replace the 80-year-old bridge, the department doesn’t know how long it will take.

The state notified the school district of the change in weight limit late last week, and the district is still trying to determine what to do, Superintendent Denise Yonts said.

“Our transportation department right now is working on routes. We don’t know yet which way we’ll have to travel,” Yonts said. “It will mean longer routes of course for our kids.”

According to an email from Highway District 12 Bridge Engineer Chris Allen to the district, the bridge was inspected in May, and engineers determined it was not safe for large vehicles. The structural problem is due to “loss of bearing area of the beams and some other locations that are unstable,” according to the email.

Allen said in a statement from the department’s District 12 office in Pikeville that inspection included the bridge deck and abutments to the foundation, piers, and supports.

“The concerns we have with the bridge are underneath and cannot be seen from the top,” Allen said.

Redstar Bridge is 2.6 miles from the Perry County line and handles school traffic from main and side roads, including KY 1103 (Linefork). Built in 1940, the bridge has had major repairs several times, including 1994 and 2017. When the repairs were made in 2017, reinforcement bar inside the concrete deck was exposed, and motorists could see all the way through the bridge at certain points.

The surface had gotten so bad since those last repairs that the Highway Department again injected money into the bridge, to make it safer for smaller vehicles.

“We repaved the deck last month to make the crossing smoother and safer,” Allen said. “However, this does not affect the issues which required the weight limit reduction.”

Yonts said she was aware of the earlier repairs, and was surprised by the state’s announcement.

“Three tons is not a lot of weight. That’s kind of scary,” she said. “Even if we used smaller buses to pick up kids, we still can’t cross that.”

The state has set aside $3.2 million to fix the structure problem, but that project is only now in the design process. George said there is no timetable for when that design will be completed, though the bridge is the top priority in the county.

A traffic count conducted in 2020 revealed more than 800 vehicles crossed the Redstar Bridge daily. Many trucking companies that used the road have changed their routes to send drivers farther south on KY 7, to Jeff in Perry County, then south on KY 15 through Isom because the road is no longer bonded as a coal haul road. That is not an option for the district because of the buses going outside the county daily. The change would also add more than an hour to the daily commute for students.

Some options included shuttling students across the bridge in passenger cars, traveling across KY 1103 and then the Southeast Road to either Blackey or Premium, and from there to Letcher Elementary School.