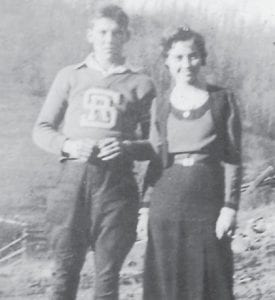 Jackie Blair Gentry was a guest speaker at the 1998 Stuart Robinson School reunion. This is the speech she gave at the 1998 reunion.

Hello, my name is Jackie Blair Gentry, a member of the Class of 1956 which was the last graduating class of Stuart Robinson School. One of my most vivid SRS memories happened during the Christmas season. It was the fad for girls to wear tiny silver bells tied to their shoestrings. I had Miss Ellis as an instructor for English. Since I had my bells tied on, I made a point to get to my seat with the crowd so I would not be noticed. We had an exam that day. My only pencil broke and I had to go to the pencil sharpener so I jingled all the way back. I had hardly been seated when a little note was passed to me. It read, “Jacquelyn, ladies are to be seen, not heard. Please remove your bells.” I can assure you I never wore bells again.

We made lasting friendships here and even though we may not be able to see each other often, these reunions have been a way to stay connected. Friends are someone with whom you can relate because you have similar values, goals and aspirations and many of us here had these qualities instilled in us in our homes and again at Stuart Robinson.

I can remember the many assembly programs that I attended in this auditorium. It was a wonderful way to begin the school day and also a time to see your friends. I can remember the first assembly held with Mr. Jack Burkich as principal. He must have been all of 24 or 25 years old. He walked onto the stage and he didn’t say a word. He didn’t smile. He just stood there and looked at each of us. It was so quiet you could have heard a whisper. As an educator, I have often thought, how did he do that?

Field day was a favorite activity of mine at SRS. We were given an entire day to be with our friends to compete against each other in fun — remember the Arcadians and the Arcadelphians? We had this entire day without close supervision and were able to handle ourselves properly. Today many students cannot be unsupervised for five minutes without getting into trouble. It must have been wonderful to be a teacher in those days.

Great teacher — someone asked me recent if education was important in the mountains of eastern Kentucky in the earlier years. I quickly answered, yes it was. I knew this was true because of my own family’s history.

My mother was Clara Caudill Blair. She was the daughter of H.D. and Anna Dixon Caudill of Carcassonne. My great- grandmother was Lucinda Burton Caudill. The Burton Hill Farm on which Stuart Robinson was built at one time belonged to Lucinda’s family. My great-grandfather James D. Caudill taught at the Burton Hill School. He received his teaching certifi- cate in 1884 from the state of Kentucky. James D. Caudill was a teacher, surveyor and minister. My great-grandparents education their children. Four of the children of James and Lucinda became teachers. One of these was my grandfather H.D. Caudill. H.D. Caudill was the first county agent of Letcher County as well as a teacher and minister.

He and my grandmother Anna Dixon Caudill donated the land and started the Carcassonne School — grades one through 12. He named the school Carcassonne after a city on a hill in France. My mother Clara Caudill Blair and my uncle Estill Caudill were the first graduates from Carcassonne High School. Some of you may have attended Carcassonne.

My mother then went to Caney College and Morehead College where she received a lifetime teaching certificate. She taught in Letcher County for quite a few years.

My father Grant Blair attended and was graduated from Stuart Robinson. For a few years he walked several miles to school from his home at Jeremiah. Later he became involved in the work program and was able to stay in the boys’ dorm. As a part of that work program, he helped to build this administration building after a fire destroyed the original building.

My father played basketball and football for Stuart Robinson. I know that Bascum McIntyre was on the team with him. We still have Daddy’s little gold basketball awarded him for being part of a championship team. My father attended Lee’s College in Jackson on a basketball scholarship.

Was education important in eastern Kentucky in the earlier years? Just look at the wonderful teachers and administrators we had here at SRS. Many dedicated their entire lives to teaching the young people of eastern Kentucky. We each had our favorites, but we respected them all.

My future career began taking shape when I enrolled in Mrs. Irene Napier’s Home Ec class. I enjoyed the class and her teaching so much I decided then that I wanted to teach Home Economics and I spent 25 years doing so and enjoyed it very much. I also had Mr. Pat Napier for Psychology and Biology. My friend Ann Dixon Back and I liked to talk in Psychology to catch up on the day’s happenings. Finally Mr. Napier told us “If you want to make an A, quit talking” — we kept on talking and received a B.

Mr. Benton Back taught a lot of us here today at Sycamore Grade School. He later transferred to SRS to teach and coach. He has been a mentor and friend to so many of us. He instilled in us a joy of learning. He also gave me my only paddling in school. Friday was called “payday” at Sycamore and he would line up everyone on his “ talking” list and paddle them. If you didn’t get a paddling, you were the teacher’s pet. So finally my name made it on the list for talking. I really was afraid because he gave hard licks with a thick paddle. Just before the paddling, I went to the bathroom and put a notebook in my underclothes and I also had on a lot of crinolines. With the first lick he knew what I had done, but he didn’t know how much it hurt. I know some of you here remember payday at Sycamore, people like Dorse Fields, Larry Caudill, Roger Haynes, Glen Back, Lovell Caudill, Gwen Fields, Anna Lou Blair and many others. Benton also happened to be my cousins, so he, Mom and Dad all had a good laugh at my expense.

Opportunities offered and opportunities accepted. At Stuart Robinson there were many opportunities to grow and develop socially, emotionally and intellectually. My sister Gwen Fields and I were cheerleaders. This was a great opportunity to represent this school. Our parents supported us fully in this endeavor. Other cheerleaders during those years were Barbara Back, Billy Ann Cole, Ann Dixon Back, Jamie Lee Amburgey, Claudine Breeding Adams, Fay Dunn, Nora Turner, Patsy Back and Inez Bowling.

We had nine-man football and some very good basketball teams. Some of the players were my brotherin law Dorse Fields, Larry Caudill, Harold Mullins, Carlos Dixon, Hal and Phil Adams, Harold Hampton, Glen Back, Leo Watts, Wayne Wheatly, Donnie Mullins, Junior Whitaker, Gurney Norman, Dan Riley and others. I hesitated trying to name them because I know I may leave some out, but everyone likes recognition even if it is 40 years late.

Mr. Cooper, the school superintendent, asked me to join the folk dance team my freshman year. The team members had some wonderful times on the campus and on trips. We traveled to several different states, but mostly to North Carolina. We would dance at high schools, colleges, churches and sometimes on TV. One program was called “Farmer Click’s” from Huntington, W.Va.

I remember two summers at Montreat, N. C., when we dancers from SRS taught folk dancing for a week to all the people at the Presbyterian Conference. We stayed in the Coopers’ cottage in Montreat. One year our chaperones were Mr. and Mrs. Dotson (Miss Chamberlain) along with Mr. Cooper. Another year our chaperones were our principal and his wife, Mr. and Mrs. Burkich. I still have photos of them with their small children.

Our travel with Mr. Cooper allowed us to have many new experiences. We visited Biltmore Estates in Asheville, we saw the outdoor drama “Unto These Hills” in Boone, N.C. and “Horn in the West” in Cherokee, N.C. We danced for Rotary International at Cumberland Falls and each female dancer received a corsage. Mrs. Hampton and Mrs. Fletcher were our chaperones along with Mr. Cooper.

We were appreciated for our efforts to represent SRS in a positive way through our dancing and we also gave speeches about the school which I am sure prompted individuals and organizations to contribute to Stuart Robinson.

While at Berea College I continued this type of dancing as a member of the Berea Country Dancers and in 1957 and 1958 I danced professionally in the outdoor drama “Wilderness Road” presented in Berea.

I had the opportunity to sit in on one of the last meetings concerning Stuart Robinson School. The meeting was at the Whitesburg Presbyterian Church. There were several businessmen, educators, parents and a few students. I was one of those students. I realize now that the purpose of the meeting was to bring closure to Stuart Robinson School. It must have been with a heavy heart that Mr. Cooper, Mr. Burkich and others spoke. I understood what was happening, but not fully the consequences until many years later.

I have talked about my memories which included good friends, great teachers and opportunities offered and opportunities accepted. I want to talk briefly about an opportunity offered and not accepted. We have among our graduates a great storyteller and accomplished author. Several years ago Gurney Norman offered to record all of our wonderful memories in a book. All we had to do was send our stories to him. I for one did not. I knew what I wanted to say, but I never wrote it down.

Gurney, I wish you would give us another opportunity. I believe we would accept it readily. We are older now, at least I am, most of us have retired and some could email their information to you.

Mr. Cooper wrote of the beginning of SRS and the hard work involved in his book Stuart Robinson School and Its Work. You, as a child of Stuart Robinson, could finish the story from the students’ point of view. These stories need to be told because it was a moment in time that needs to be remembered.

I want to thank the reunion committee for working so diligently all these years to give us these wonderful reunions!