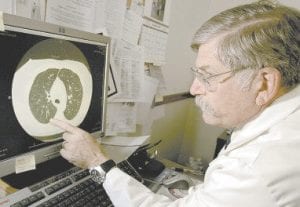 Dr. Allen Parmet, a public health physician in Kansas City, Mo., points to a chest scan of one of his patients who contracted a lung disease as a result of exposure to buttery microwave popcorn flavoring. (AP Photo/Charlie Riedel)

Each morning, Eric Peoples sits up in bed and starts his day with a cough. A deep, long, hacking cough.

He plants his feet on the bedroom floor and immediately feels as if someone is standing on his chest. That’s a good day. When it gets really bad, it seems as though a giant creature is crushing his lungs, squeezing the breath out of him.

Eric Peoples has lived this way for several years. He got sick while mixing butter flavoring at a Missouri microwave popcorn plant, developing a ravaging lung disease that has tormented a small but alarming number of food workers across the nation.

Peoples sued. He won millions of dollars. Money isn’t a worry now. His health is.

At 35, he has lost threefourths of his lung capacity. He relies on oxygen when it’s humid; one day, he may need a double lung transplant.

Peoples says no amount of money can make up for missing out on the chance to play ball with his son or teach his daugh- ter to ride a bike. He isn’t as angry as he once was, he says, and is thrilled that some microwave popcorn makers will stop using the chemical tied to his illness.

But even now, it’s confounding to him that a pungent-smelling flavoring he poured in giant vats, a bright yellow puddinglike substance used to improve the taste of a common snack – popcorn – could change his life.

“When I first started getting sick, I was trying to figure out what it was,” he says. “It never dawned on me that it was the butter flavoring. It’s food. You eat it. I kept telling my family, surely it can’t be. Why would something like that be harmful? How could it be bad?”

By that yardstick, mixing an additive that’s used to flavor popcorn, candy, baked goods and other foods – it’s also found naturally in small amounts in staples such as milk and butter – almost seems innocuous.

For several years, diacetyl, a chemical that gives foods a buttery taste, has been linked to a rare, irreversible lung disease. The result has been a public health debate that has stretched from Congress to courtrooms across the nation, leading to tens of millions of dollars in judgments.

Scientists, doctors, politicians, food companies, labor unions, lawyers and others have weighed in – some pointing angry fingers at the government – as hundreds of workers have claimed they have severe lung disease or other respiratory illnesses from inhaling diacetyl vapors.

And it may go beyond workers. It was recently disclosed that a man who ate at least two bags of buttery microwave popcorn daily for several years may have the same disease found in workers. His lung problems were linked to breathing the vapors.

Now some major microwave popcorn companies have eliminated or plan to drop the ingredient, while Congress – with the support of the flavoring industry – is looking to reduce the danger in the workplace. But the Bush administration, some business groups and others say there isn’t enough scientific evidence to warrant immediate government limits.

Edwin Foulke Jr., a top federal official, testified this spring at a congressional hearing that diacetyl is a “substance of suspicion,” but there’s no clear evi- dence it’s the one chemical that causes this disease.

But the doctor who was one of the first to detect the illness in workers says the science is solid and popcorn makers are right to drop diacetyl.

“I just wish this had been done earlier,” says Dr. Allen Parmet, a Kansas City public health physician. “There are hundreds of people who are sick and who are hurt and it never should have happened.”

Seven years ago, an attorney asked Parmet to review the medical records of several workers with some unusual lung problems.

Within 20 minutes, Parmet says, he knew what it was: bronchiolitis obliterans, a devastating disease that destroys the small airways of the lungs, leaving victims coughing and gasping for air.

Parmet had seen it only three times in 25 years. Now he was poring over documents indicating several people had the disease – all employees of the Gilster-Mary Lee microwave popcorn plant in Jasper, Mo.

The National Institute for Occupational Safety and Health dispatched investigators to the plant. By 2001, it had reported a link between butter flavorings and the disease, which became known as popcorn lung.

Three years later, the agency sent an alert to 4,000 companies with about 150,000 workers explaining steps that should be take as safety precautions, such as respirators and better ventilation systems.

He says he was diagnosed with bronchiolitis obliterans in 2002, after working two years at a ConAgra microwave popcorn plant in Ohio.

Why, he asks, did it take five years to do something about this?

“Once something is found out something is bad for you, instead of trying to control it, I think it should be banned,” he says. “I don’t care if it’s butter flavoring or a nuclear power plant.”

Campbell doesn’t blame the plant. He sued the flavor companies, winning an undisclosed settlement. But it’s a hollow victory.

So he putters around his house in Caledonia, Ohio, forcibly retired, trying not to wear himself out, even though sweeping a bedroom or changing a light bulb can do just that. And every time he drives by the popcorn plant, the powerful smell makes his chest ache.

Bronchiolitis obliterans can be confused for asthma or bronchitis. Sometimes, the disease progresses very quickly.

“In months you can go from being a healthy person to hardly being able to breathe, coughing all the time, not being able to do your job,” says Dr. Richard Kanwal, a NIOSH medical officer who has investigated the illness since 2001. “It’s terrifying.”

Over the years, NIOSH investigators have identified or reviewed medical records of dozens of cases in microwave popcorn plants in Illinois, Iowa, Missouri, Nebraska and Ohio and flavormaking plants in California, Indiana, New Jersey, Maryland and Ohio.

There have been three reports of deaths among workers.

How many people are ill is unclear.

Kanwal says some cases may have gone undetected many years ago – a few go back to the 1980s – and he has heard reports of sick workers at candy and potato chip plants but has not yet been able to investigate them.

“There could be dozens or hundreds more that we’re not aware of,” he says.

There are, however, hundreds of claims filling the court dockets.

Missouri attorney Ken McClain has more than 500 lawsuits pending against the companies that produce or use the butter flavoring. About $50 million has been awarded in verdicts that were later settled for confidential amounts. Another 100 cases have been settled that reportedly involve tens of millions of dollars.

As civil lawsuits have increased, so, too, has pressure on federal agencies by scientists, unions and some in Congress to do more to protect workers.

The Occupational Safety and Health Administration has been criticized by some researchers, unions and doctors who claim the agency has been lax, not ordering safety standards or increasing inspections at plants using diacetyl.

“Their performance has been miserable,” says David Michaels, a professor of occupational and environmental health at the George Washington University School of Public Health who writes about diacetyl on his blog.

This spring, Foulke, assistant secretary of labor for OSHA, defended his agency, saying that after the 2001 Missouri cases, it alerted its regional offices and ordered them to look into the issue. He also said the OSHA region that included many popcorn plants produced a brochure.

“Sending out a brochure is not enough when you’ve got a disease that’s destroying people’s lungs,” Michaels says.

OSHA has increased its activity on diacetyl since April, with stepped-up inspections of microwave popcorn plants that use the flavoring and a program to minimize or eliminate the workers’ exposure to chemical hazards.

For Michaels, it’s too little, too late.

Why, he asks, weren’t plants inspected earlier, and why hasn’t there been more attention on flavor workers who’ve become ill?

“It would have been better,” he says, “to be safe than sorry.”

After years of studies and lawsuits, the popcorn lung debate reached the floor of Congress this fall.

In September, the U.S. House of Representatives ordered federal safety regulators to compel microwave popcorn factories and other plants to limit exposure to diacetyl. The bill is supported by the Flavor and Extract Manufacturers Association.

Whether that measure will become law is unclear. Opponents say this step is premature and believe that focusing on diacetyl alone ignores the possibility other flavorings are involved in the disease.

Foulke, the OSHA official, recently denied a labor petition asking for an emergency workplace limit on the chemical, saying there isn’t conclusive proof it causes the illness or that exposures “constitute a grave danger.”

He also noted that four major companies are eliminating diacetyl.

That won’t help Eric Peoples. He takes a dozen pills each morning – and tries not to worry.

“This is a pain to live the way I am,” he says. “But there’s always somebody worse than I am. And every morning, I keep telling myself, it’s one more day this thing hasn’t beaten me.”

On the Web: www.osha.gov www.DefendingScience.org