A tribute to Larry Mullins 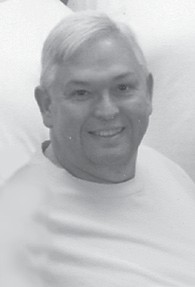 Larry Mullins, affectionately known by our retired operating room crew as “Biggin,” was a loving son to Vernell, caring brother to Gary and Tabitha, faithful husband to Sandy, special brother-in-law to LeeAnna and Tim, devoted father to Josh, Becky and L’Erin, dear father-in-law to Dana and Jeff, proud grandfather to Ethan and Daulton, a skilled nurse anesthetist and beloved friend and gourmet cook to many.

Yes, Larry was all of these and more.

We grieve his loss and while we all knew what was inevitable, his passing still leaves an empty feeling in all our hearts. We know he is in Heaven. His body is free of physical ailments and pain and he is reaping eternal reward with his father, Morris, and daughter L’Erin. That is our Catholic faith. Our time on Earth is merely God’s place to prepare us for our final journey. Larry was ready.

I first met Larry in the fall of 1982. Larry was the kind of person who always made a special impression when you met him. Fortunately for me, it was a good one. We shared many good times in the OR and outside of work. We raised our children together and enjoyed many school activities, trips, and stories about the “switch tree.”

Allow me to share some special memories. Larry was a skilled RN anesthetist who put patients to sleep during surgery, monitored them intra-op and followed their recovery. His favorite saying to me was, “Nurse Jones, anybody can put you to sleep, but it takes skill to wake you up!” How true!

He was the consummate professional, loved his patients and had the respect of our OR crew and surgeons. He loved his job and he was fun to work with.

One of my fondest memories was his conversion to the Catholic faith in 1990. He said, “Nurse Jones, I want to be one of those ‘Mackerel Snappers’.” I thought he was kidding. He was not, and I became his sponsor. He became one of the best “Fall Festival Fish Fryers” with his special beer batter! Sadly, his funnel cake machine never got off the ground!

Larry was a wonderful cook and baker. We teased him about his pots and pans having to go on a cargo plane with him to Hawaii, however, we never turned down a meal invitation. I nearly strangled on his Cajun gumbo soup! It was too spicy for me.

He was at his best cooking and entertaining his friends. He was quite proud that his culinary skills and new kitchen were featured in a Ledger Independent article.

Larry also loved attending Becky’s basketball games. The St. Patrick team enjoyed much success when our children were there. My job was to sit with Larry at the games and keep him calm. The referees knew him by name.

We also had great fun on our two Washington, D.C. trips in 1990 and 1993. The 1990 trip was the first-ever train ride for our children. Larry was an eloquent storyteller and entertained all of us with our favorite medical stories on that trip.

You have not lived until you ride a train to D.C. with three cars of Baptists going to their national convention and two rear cars of Catholics. We also had one gentleman who joined our group whose only luggage was a paper bag with liquor.

The 1993 trip was much better because we rode buses. Only problem was, it was 90 degrees every day and our bus lost its air conditioning. Again, Larry to the rescue. More storytelling, and I think the late Pat McKay is still laughing to this day! Larry also lectured several street patrons on the value of employment . . .

All in all, those two trips were outstanding. They were fun and educational for our children. They always evoke treasured memories shared with our friends who truly cared for each other.

Of course, Larry was no saint. None of us are. He had faults as we all do. He loved to get jokes on you, and was unmatched in telling jokes. He took payback in good sport (most of the time). He enjoyed his plaster of Paris birthday cake, and was quite impressed to hear that we tried to procure the “Kahn’s Pig” for a yard decoration!

He was a man who loved his family and friends, and enjoyed life. He told me this past fall he knew his health was declining. He said he did not want us to remember him with sadness and tears. He wanted to know if his life had made a difference.

Well Larry, you did, and I think that is the ultimate tribute we can give you. So many condolences given to your family these past days remark on your laughter, good times shared, and the generous way you gave yourself to all of us.

So I ask all of you to think of a good memory, a laugh, or joke, a fun time or meal you had with Larry. Remember him with laughter, not tears. He wanted that.

Rest in peace, my dear friend. Put in a word for all of us for when we meet again at those pearly gates. I can absolutely say you made a difference, and we’re all glad we knew you!