‘A victory for all of us’ 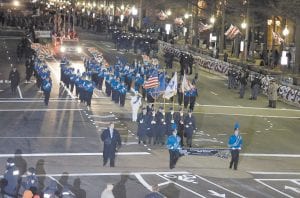 The Letcher County Central High School Marching Band and JROTC Honor Guard performed during the 57th Presidential Inaugural Parade on Pennsylvania Avenue in Washington. The band was among 42 groups in the parade, held after the ceremonial swearing-in of President Barack Obama. (AP Photo/Alex Brandon)

President Barack Obama, who stood in a reviewing stand in front of the White House, smiled and clapped as the LCCHS Marching Band and JROTC Honor Guard marched past him around 6:30 p.m. on January 21. The Letcher County unit, which was the only one from Kentucky, was shown performing in the parade live on C-SPAN.

Officials said a total of 2,807 bands submitted online applications, and that LCCHS’s band and honor guard was one of 42 groups chosen by the parade task force to participate.

As the result of a drawing for position, the unit was fourth from last to march in the parade.

“I couldn’t be any more proud of a group of students than I am right now,” said LCCHS band director Jason Griffith in a statement on the band’s Facebook page. “In the fall of 2006 when I moved here, there were six kids in the marching band. I made a promise to all of those students that if they stuck with it, they would be building the future for our band program, a future with great promise.” 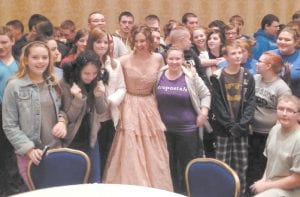 Members of the LCCHS Marching Band and JROTC Honor Guard posed for photos with actress and former Kentucky resident Ashley Judd during the Bluegrass Inaugural Ball.

With VH1 Save the Music grants and an emphasis on offering band classes to younger students, the band has grown in the last six years. Seventy students, including some middle school students, marched in the Inaugural Parade.

“As much as today’s performance was a huge realization of all the work this year, it is also a testimony to all the students who marched in Letcher County —regardless of the school or year in which you marched,” said Griffith. “This parade performance was about our community, our traditions and the great future that awaits our young minds. Today was a victory for all of us.”

The group had a goal of raising about $75,000 to cover costs of transportation, food and lodging. Various fund-raisers were held in the last few weeks including a radio-thon broadcast on WXKQFM 103.9, a chili supper and an exhibition. 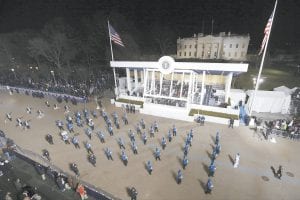 “We are so blessed to have the great community, students, and school leaders we have,” said Griffith. “They helped make this happen and we share in this joy today. Thank you everyone. You did something wonderful.”

In addition to marching in the parade, the LCCHS Marching Band and JROTC Honor Guard performed at the Kentucky Society of Washington’s Bluegrass Inaugural Ball at the Marriott Wardman Park on January 19. The students met Gov. Steve Beshear and Jane Beshear.

Ashley Judd spent time chatting with the group at the ball and tweeted on her Twitter account “Elegant event, had a lovely time. Enjoyed meeting our new members of Congress and Letcher County HS Band. My highlight.”

The group spent time at the Smithsonian Institute museums and took a walking tour of the Lincoln, Korean War, Vietnam War, Martin Luther King Jr. and World War II memorials. The group participated in a special wreath-laying ceremony at the Tomb of the Unknown Soldier. Students visited the Marine Corps Memorial (also called the Iwo Jima Memorial) and the Thomas Jefferson Memorial.

Soon after the parade ended Monday evening, students, school staff and chaperones boarded a chartered bus and headed back to Letcher County where they received a police escort Tuesday morning.