A wonderful man who never forgot his friends or heritage 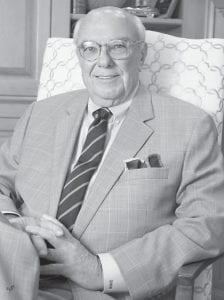 My classmate, Don Webb, was a wonderful person who never forgot his childhood friends or his heritage. He was always full of laughter, witty remarks, and inspiration and did many benevolent deeds that were unheralded.

He, along with Bert and Arylene Francis, was the glue that held our WHS classes together.

For the “All Whitesburg Classes” reunion in 2005, he wrote the following:

“While those who came before and later would certainly disagree, our contemporaries believe that the graduating classes of the 1950’s were the best students to pass through those hallowed doors of Whitesburg High School. Many of us believe that we had good enough facilities, the most dedicated teachers, the best athletic teams, the most talented band, the highest academic stars and the most fun of any group to pass that way, before or after!

“Our classmates were born during the 1930’s, a time when the great Depression had not yet left Eastern Kentucky. But, we survived, thank you. Many of our families and friends fought in World War II, the Korean Conflict and Vietnam to keep this country free and strong. We all remember those sacrifices with thanks and will never forget the price paid by so many of our family, friends and neighbors.

“Our 1950’s high school decade was a period when some families owned an automobile and some didn’t. Very few of our fellow students had their own car, but those without one always managed to get around some way.

“Television? Not in those early years. But, we didn’t need it. We had imaginations bigger than any television could every project. While our libraries may not have contained a large number of books, the use of those few that were available taught us to read, write and spell. The experiences of spelling and arithmetic matches in grade school created skills that modern machines cannot duplicate.

“There are those who think that times were bad and our country was poor in the ‘50s. Maybe times were bad. And, maybe we were poor in some ways. But, not in pride and heart and love and determination and support from teachers and families that made all of us want to succeed as students and beyond.

“Sure, we had limited resources in the equipment and facilities. But, we were not lacking in the most important education resource. This resource was teachers who gave their every effort to enabling their pupils to learn, both academically and socially.

“What was the result? Success! A disproportionate number of the students attending Whitesburg High School during the ’50s have accomplished much in their lives compared to other schools and communities.

“Maybe things have not always gone exactly as we had planned. Maybe the success cannot be measured in our material accumulations or wealth.

“The very fact that many of us are still here and able to attend this reunion and visit with our friends is a sure sign that we have succeeded in living a longer life than some of our classmates and friends. And, that God has looked favorably on us by allowing us to be here.

“The ‘Fabulous Fifties’ classes of Whitesburg High School graduated more than its share of teachers, business people, doctors, lawyers, nurses, factory workers, coal miners, soldiers, politicians, truck drivers, technicians and others. More importantly, it produced husbands and wives, mothers and fathers, children, brothers and sisters and friends who were a part of our “greatest generation”.

“There are some of us who would not exchange the experiences of life in Letcher County and Whitesburg High School in the ’50s for training at the finest and best known prep school in the nation or some school which was located in what might have been located in the best town or state in the U.S.A. Some of us sometimes regret that our child or children did not have the experience of living and going to school with the people and to the teachers that we did in Letcher County and Whitesburg High School.

“Now Whitesburg High School is for the ages. But its memories are deeply etched in the hearts and minds of many generations, all thinking that their days at old WHS were the best!

“Thanks for those memories. And, good-bye, “Old Whitesburg” High School!