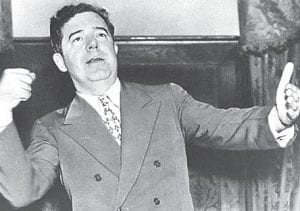 NOTE: Estevah Webb, daughter of Mountain Eagle founder Nehemiah M. Webb, left her job as bookkeeper of the newspaper and job printing company in 1934 to move to Washington, D.C. She wrote the following letter to her father, who published it on the front page of the March 8, 1934 edition of the paper after Miss Webb visited with former State Representative and Whitesburg Mayor Emery L. Frazier, who by then had risen to the position of legislative clerk of the United States Senate.

Frazier was an attorney who left Whitesburg for Washington at the urging of his friend Senator (and later Vice President) Alben Barkley, a Democrat from Kentucky. He was appointed Chief Clerk of the Senate in 1948. In August 1965, Frazier was chosen as Secretary of the Senate, a position he held from January 1, 1966 until he retired nine months later.

Frazier’s rich baritone voice became familiar to millions of radio listeners and television viewers who heard him call the roll of states at Democrat national conventions from 1936 through 1964. Frazier returned to Kentucky in 1970 and died three years later.

The following is a short extract of a personal letter received from Estevah Webb, who is now in Washington:

Yesterday afternoon “Frizzy” [Frazier] and I went over to the Senate. I was very much fascinated by the whole affair. Of course, I took my hat off to Kentucky — one could not help that — with Senator Barkley presiding, Senator [Marvel M.] Logan [D-Ky.] on the floor and above all, Emery [Frazier] efficiently “functioning” in his role as clerk.

Often I had wondered as to what all this national “stuff ” consisted of, and now I know less than ever. Observing from the gallery, it seemed to me Huey Long insisted on holding the floor, boosting the little man and ripping the big firms straight up the back as only the big Louisiana Senator can.

In spite of all the cartoons and “hooey” about him, I could at least understand what he was saying, and that is more than I can say for a number of them. It seems the senators all bore each other, as they pay little or no attention to the one who has the floor until something comes up to produce an argument — then whoopee!

Senator [William E.] Borah [RIdaho] was just as I expected him to be. Garner, too, was there, but was not presiding, just walking nonchalantly around, as I suppose Vice-Presidents are supposed to walk.

Senate recessed until Monday without me knowing very much of what it was all about, and so far I haven’t seen the President. Guess he hasn’t heard I’m in town. We drove by the White House last night. Looks like a nice “roomy” place to live, but at the time we were riding so in class that the house didn’t impress me so.

Just returning from dinner downtown with Mr. and Mrs. Haymond, Frizzy and Emory riding in the Senator’s “chauffeured” car, so we didn’t feel at all like poor working people.

Guess that you know that “Red” Kimbrell of Neon is the Senator’s chauffeur, so it was just a Letcher County gathering.