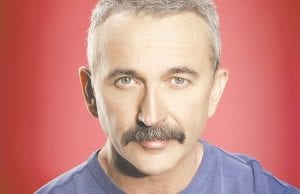 Country music performer Aaron Tippin says he enjoys playing at events such as the Letcher County Mountain Heritage Festival, where he will take the stage Saturday night.

“It ain’t no stand on the stage and tap your toe type of show,” said Tippin. “We’re going to have fun.”

Tippin, who is a celebrity spokesperson for Toys For Tots, said he sometimes puts a bicycle together during his show and finds other ways to entertain a crowd because “I ain’t very pretty to look at.”

Tippin, 54, is familiar with a festival atmosphere and says the events are “a cool gathering of a town.”

“ That’s what country music is — fairs and festivals,” said Tippin, who performed in Ashland a couple of weeks ago.

Tippin plays about 100 shows a year. He owns his own record label, NIPPIT, which is Tippin spelled backward.

Tippin’s career jumpstarted when his 1991 debut single for RCA, “You’ve Got to Stand for Something,” became a favorite of Gulf War soldiers. “Where the Stars and the Stripes and the Eagle Fly” was released after Sept. 11, 2001 and is his most successful crossover single. Other hit country singles by Tippin include “I Wonder How Far It Is Over You,” “There Ain’t Nothing Wrong With the Radio,” “That’s As Close As I’ll Get to Loving You,” “For You I Will,” “I’m Leaving,” “Kiss This,” “People Like Us,” “I Wouldn’t Have It Any Other Way,” “Workin’ Man’s Ph.D.,” “ The Call of the Wild,” and “I Got It Honest.”

More than 30 of Tippin’s singles have been listed on the Billboard’s Hot Country chart. In addition to his hits, Tippin said he will perform cover songs at the Mountain Heritage Festival, including Terry Fell’s “Truck Drivin’ Man” from 1954 and “Six Days on the Road,” a classic written by Muscle Shoals Sound Studio’s Carl Montgomery and Earl Green and released as a single by Dave Dudley in 1963.

Entertainment Weekly once compared Tippin’s baritone voice with Hank Williams Sr. for “the catch in the throat, followed by a sliding moan.” He was born in Penscola, Fla., reared in Traveler’s Rest, S.C., and now resides in Liberty, Tenn. with his wife, Thea.

A man of many hobbies, Tippin likes to spend time outdoors and is an avid hunter and fisherman. He also owns a winery and owns and flies his own airplanes. Tippin has been certified as multi-engine commercial pilot since he was 18 and was working on one of his planes recently while talking with a Mountain Eagle reporter.

“We have a little exhaust issue with an airplane,” Tippin explained between taking questions about his career and giving instructions to another man helping him work on the plane.

After bodybuilding and weight lighting for 28 years, he decided to create his own nutrition line called Aaron Tippin Nutrition. He has a line of weight loss seasonings called Tip N Shaker.

“We just decided we would show it off and see what people think about it,” he said.