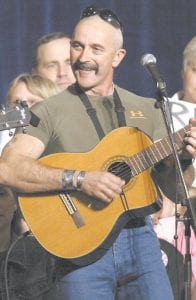 Aaron Tippin will perform in Whitesburg in September. (AP)

Tippin, 53, will perform in Whitesburg on Saturday, Sept. 29.

Tippin, whose career was jumpstarted when his 1991 debut single for RCA, “You’ve Got to Stand for Something,” became a favorite of Gulf War soldiers, was born in Penscola, Fla., and reared in Traveler’s Rest, S.C.

Other hit country singles include “I Wonder How Far It Is Over You,” “There Ain’t Nothing Wrong With the Radio,” “That’s As Close As I’ll Get to Loving You,” “For You I Will,” “I’m Leaving,” “Kiss This,” “People Like Us,” “I Wouldn’t Have It Any Other Way,” “Workin’ Man’s Ph.D.,” “The Call of the Wild,” “I Got It Honest,” and “Where the Stars and the Stripes and the Eagle Fly.”

Entertainment Weekly once compared Tippin’s baritone voice with Hank Williams Sr. for “the catch in the throat, followed by a sliding moan.”