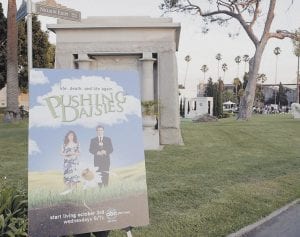 ABC has cultivated a marketing campaign for “Pushing Daisies” that could make producers of other new shows green with envy.

A hybrid drama-romantic comedy about a man who can reverse death, “Pushing Daisies” has been heaped with critical praise based on its beautifully executed pilot episode. ABC, sensing the potential for a hit that could bolster its schedule, is lavishing the series with promotion.

The “Daisies” pushing started early with summertime spots running in movie theaters. Then came the public screenings, including one at the Hollywood Forever Cemetery here, at the increasingly influential Comic- Con pop culture convention in San Diego and at the New York Television Festival on Sept. 8.

Thousands of daisies, with tags attached touting the show, are being handed out to the public in big cities. Some magazine readers will see glossy, eyecatching ad that reveals a popup paper daisy.

Then, of course, there’s the on-air radio and TV promotion as well as billboards.

The goal is to create early enthusiasts who will talk up the series before its Oct. 3 premiere, said Michael Benson, ABC’s executive vice president of marketing.

“The most important resource is our on-air promotion, and No. 2 is word of mouth,” he said.

Only time and Nielsen ratings will tell if the chatter counts, but there is a discernible buzz. After the cemetery screening, a rave review from one “Jenn P.” popped up on USA Today’s Pop Candy blog.

“It was fabulous!” she wrote. “The show is soooo vibrant and charming, it is impossible not to fall under its spell. Plus, they gave us daisies and free pie! What’s not to love?”

Pop Candy also invited readers to watch an extended preview of the show on YouTube. But don’t look for the full episode online – that’s not in Benson’s marketing playbook for “Pushing Daisies” or other ABC contenders, he said.

“I have the same approach that Coca-Cola might have when they’re launching a product,” Benson said. “The idea is to get people to sample a product, then come in and buy more. You don’t give a six-pack; you give a sample and hope they’ll buy a six-pack if they like it.”

He’s concerned that if the show were made available online that Nielsen-measured viewers might watch it and skip the onair premiere, diminishing the crucial early ratings.

Bryan Fuller, creator and an executive producer of “Pushing Daisies,” is more than happy with ABC’s marketing plan. He’s reveling in it, deeming it an “an honor” to be singled out among the network’s heavy load of eight new fall shows.

As a TV veteran with credits including the hit “Heroes” and acclaimed but quickly shelved “Wonderfalls,” he knows what it’s like to have or lack network support.

“‘Heroes’ got a great marketing push from NBC and that was a fantastic experience, to have people be aware of (it),” Fuller said. “With ‘Wonderfalls,’ friends said, ‘Hey, when is the show coming on?’ I said, ‘It was canceled a month ago.'”

It’s hard to express, he said, what it’s like “being the producer wondering why there’s not more money” to promote a show.

Some TV producers likely are thinking similar dark thoughts. With so many shows to promote, equal treatment is impossible, ABC’s Benson said. It’s up to Stephen McPherson, ABC’s entertainment president, to weigh what the network and its schedule needs and act accordingly.

“We pick and choose what we think has the greatest shot of being really accessible,” Benson said. “Hopefully, the audience will sample those and cross over and sample other shows we have.”

“Pushing Daisies,” which will air 8 p.m. Wednesdays, has a special burden because it anchors the night for two other newcomers. It needs enough heft to bring viewers in and then keep them around for “Private Practice” (the “Grey’s Anatomy” spinoff) and “Dirty Sexy Money.”

Some elements of the show’s campaign echo other successful ABC launches of past seasons. “Lost” was first screened on a beach in Hawaii, where it’s filmed, and was a trendsetter at Comic-Con with a showing there.

It was dry-cleaning bags instead of daisies that were handed out before the “Desperate Housewives” premiere, each printed with the slogan, “Everyone has a little dirty laundry.”

While prospective viewers are learning about new shows, ABC is gathering information on how to fine-tune its selling of the product.

“When we started with the ‘Desperate Housewives’ campaign it was more dark and mysterious. But what we heard from audiences that saw it over the summer (before its debut) was it was such a fun show,” Benson recalled.

“So we added fun to the sexy, soapy aspects and that’s when the campaign really came alive,” he said.

That experience influenced the marketing of “Pushing Daisies,” which also has varied shades to promote. There’s dark humor, forbidden love (the hero, Ned, revived his great love but would kill her with another touch) and even a touch of police procedural (Ned, played by Lee Pace, resurrects murder victims to solve their crimes).

The goal is to avoid narrowly defining a series.

“What we’re really trying to do is create an overall feel of a show. Viewers can make up their mind for themselves what they want the show to be,” Benson said.

However masterful the marketing, however, “Pushing Daisies” or any series ultimately thrives or wilts because of what’s on the screen each week.

“It’s a great show and I hope the audience feels that way. At the end of the day, the audience will decide,” Benson said.