ABC’s hidden cameras are back 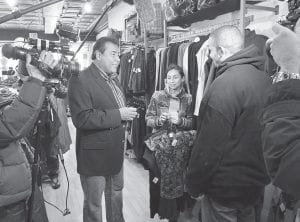 You’re standing in line at a deli behind two day laborers fumbling with cash and struggling with English, when the clerk begins spewing hatred. Go back to your country, he says, or go eat at Taco Bell.

What would you do?

Stand in uncomfortable silence, hoping simply to leave as quickly as possible? Tell the clerk to shut up? Or join in with the bigotry, kicking the men while they’re down?

When ABC News set up that scenario in a New Jersey deli, hiring actors to portray the clerk and laborers and hiding cameras to record the reactions of real people, it found all of those responses — and more.

The intriguing take on public attitudes toward immigration was featured on Tuesday’s episode of “What Would You Do?” a news-reality hybrid that’s gotten some traction on ABC.

Producer Chris Whipple thought of the idea after wondering if there was a way to do a TV version of “The Ethicist” column in The New York Times Sunday Magazine. There was an immediate response in the ratings after “Primetime” carried the first segment in 2004 with an actor portraying a babysitter verbally abusing a boy in a park.

ABC carried five “What Would You Do?” hours last winter, and doubled the order for this year after it was the highest-rated newsmagazine among younger viewers.

“It’s the kind of insightful television that makes you think, the water-cooler stuff you talk about the next morning,” said John Quinones, who anchors the series. “It’s pretty powerful, and a reminder that you’re not in this world alone. You have to look out for your fellow human beings.”

The deli segment proved emotional; even though he was an actor, one of the men portraying a laborer cried later at the way he was treated.

One black man initially advised the laborers to get out of the deli, at first seemingly in sympathy but then in anger. In an interview after Quinones stepped in, he acknowledged being mad at immigrants taking away jobs. He softened after an hour’s thought, realizing he was guilty of the same discrimination that he himself had experienced.

Quinones, who grew up in San Antonio, dressed down and took a few turns himself posing as a Spanish-speaking laborer.

“Even though I knew it was all an act and the guy behind the counter was being paid to say these awful words, the words still stung,” he said.

The series also sends two actors posing as a couple on their first date to a bar. When the woman briefly steps away, the man slips what appears to be a drug into her wine. Will others at the bar pretend they didn’t see it, or make sure the woman doesn’t drink the wine? ABC tested whether the reactions changed when the woman dressed more suggestively.

Not all the social experiments are serious. ABC sought people’s reactions to loud cell phone users and public displays of affection. A funny upcoming segment features a man in a grocery store who asks to cut in line, then wins a fake big-money prize as the store’s millionth customer.

Here’s how highly ABC thinks of the show: Even during troubled economic times, Quinones and Whipple scored a trip to Paris last summer to find out whether or not the French were snooty toward American tourists.

“What Would You Do?” is also a sign of changing times at broadcast news divisions. Quinones is a veteran journalist who reported about Central America for “World News Tonight” and won Emmy Awards for stories on the Congo’s rain forest and the Yanomamo Indians. Now he spends most of his time on concocted social situations, a few steps up in class from NBC’s “To Catch a Predator” series.

Quinones admitted to some trepidation about the idea at first, but he said it has been erased by how many times he’s seen brave people do the right thing.

“How many other newsmagazines are tackling domestic violence, racism, attacks on the homeless, date rape, hazing, shopping while black?” Whipple said. Some of the experiements come directly from the news: the recent stabbing death of an immigrant from Ecuador on Long Island has inspired a segment where people’s reactions will be tested when they see day laborers threatened with physical harm.