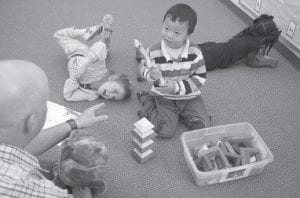 Should preschool be more about ABCs or learning to play with others? With the help of Twiggle the Turtle, scientists found out that youngsters do better if they do both.

So concludes a major study in Head Start programs in Pennsylvania, research with implications for preschools and parents everywhere.

Face it, 4-year-olds are lovable but self-centered, impulsive and prone to meltdowns. Teaching them not to whack a classmate who snatches a toy is a big part of preschool socialization.

But growing awareness that early learning is important to future school achievement has put more pressure on preschool’s academic side, especially efforts to eliminate achievement gaps between low-income and wealthier students.

With funding from the National Institutes of Health and other federal agencies, they divided 44 Head Start classrooms with about 350 4-year-olds. Half taught a traditional Head Start curriculum.

The other half added to their traditional teaching a program called REDI Head Start that included weekly special social lessons — puppets or stories that teach specific problem-solving skills.

Take Twiggle the Turtle. He pushed his friend after she knocked over his block tower, and thus couldn’t play anymore. A wise old turtle told Twiggle that when he got upset, he should go inside his shell, take a deep calming breath, and say what bothered him and how it makes him feel: “It really made me mad that you knocked my blocks over.”

Cross your arms to be like Twiggle in his shell, the teachers tell their preschoolers. Then practice what James might say if Suzie takes the toy he wants, or if Billy says something mean to Tommy.

Instead of the vague “use your words” advice that parents tend to spout, “be like Twiggle” became the theme and a good habit.

Another enrichment tested: More intense reading-readiness instruction. It included interactive reading — where the teacher asks questions after each page or so to work on vocabulary and comprehension — and listening games to tease out discrete sounds in words. Both require self-control to focus.

By year’s end, preschoolers given enriched instruction scored higher on tests of school readiness, both social and academic, Bierman reported November 14 in the journal Child Development.

The new study shows how to teach children positive steps, not just what to avoid, in a way that’s easy for busy teachers, he said. Much of the enriched curriculum is commercially available, along with similar programs also being studied in Head Start.

“You can impact both social, emotional and the pre-academic skills at the same time, in the same classroom, with the same teacher, without overwhelming the teacher,” Griffin said.

Bierman next wants to train parents to reinforce these lessons. Meanwhile, her advice for parents:

— Ages 3 to 7 are a key window for learning self-control. Talk to youngsters daily about their feelings and how to work through problems. Who did they play with? What made them happy? What made them sad?

— Get a misbehaving child to take a deep breath and calmly explain his or her feelings. That doesn’t mean give in. But saying, “I see you’re sad but it’s still bedtime,” helps children learn they can feel upset but still meet obligations.

— Parents should calm down, too. “It doesn’t help to use your words if you’re just yelling,” Bierman notes.