About Hillary and Bernie 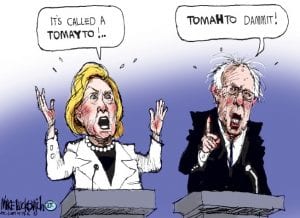 Compared with the ferocious fractiousness of the Republican campaign, Hillary Clinton and Bernie Sanders are operating by rules inspired by St. Francis of Assisi, the gentle animal-loving holy man whom Pat Buchanan once derided as “the pacifist with the pigeons.”

But with the GOP setting a very high standard for political brutality, that’s not saying much.

Any doubt that Clinton and Sanders are fed up with each other was put to rest in last week’s debate. In big block type, the New York Daily News proclaimed them “Brooklyn Brawlers.” They went at each other as if there would be no tomorrow after New York votes. That’s pretty much true.

You sensed from Sanders’s aggressiveness that he knows he’s on the edge of effective elimination. So it’s time to ask: Will both candidates now acknowledge that the differences between them are minor compared with the philosophical chasm that separates them from any of their potential Republican foes?

The issue of particular contention between the two Democrats is, paradoxically, the one that shows how far both are from the GOP: what to do about the financial system.

Sanders wants to break up the big banks, seeing anything short of this as selling out. Clinton argues that breaking them up won’t solve the financial system’s problems and wouldn’t touch the many nonbank institutions that helped cause the crash that led to the Great Recession. Instead, she proposes much tougher regulation.

Their underlying argument is more than a century old, reprising an internecine progressive fight that goes back to the 1912 election. It was an American classic when the Republican Party split into two: the relatively conservative incumbent president, William Howard Taft, secured the party’s nomination; former President Theodore Roosevelt walked out and formed the Progressive Party. Two other progressive candidates, Democrat Woodrow Wilson and Socialist Eugene Debs, rounded out the most remarkable field of candidates American voters were ever offered.

Although Sanders reveres Debs and has a medallion commemorating him in his Senate office, his position on the banks is closer to Wilson’s approach to monopoly. Proclaiming his devotion to a “New Freedom,” Wilson wanted more aggressive anti-trust actions and warned, Sanders-like, that the country was nearing “the time when the combined power of high finance would be greater than the power of the government.”

Roosevelt, arguing fora “New Nationalism,” saw economic concentration as inevitable and believed Wilson’s approach was naive. He saw stronger government regulation of large entities as more likely to secure both justice and efficiency. When it comes to the world of finance, Clinton is the TR candidate this year.

I’ve always been sympathetic to Roosevelt’s side in that argument, but the larger point is that Sanders and Clinton (like Wilson and Roosevelt before them) both see government as playing an important role in checking concentrated economic power and preventing abuses of the system.

And the Republicans? Donald Trump, Ted Cruz and John Kasich would all reduce government supervision of the financial system by repealing the Dodd-Frank reforms. Clinton and Sanders are arguing about what needs to be done. The Republicans want to do less altogether.

Or take health care. Clinton and Sanders have battled fiercely about how to move forward from Obamacare, but both want to build on its successes. Republicans would repeal it. The two Democrats have squabbled about how much the minimum wage should go up; the Republicans all oppose a federal minimum wage increase. Such party differences are multiplied across a broad field of issues.

At a time when ideological polarization between the parties is so high, such contrasts should be obvious. But the bad blood between many of Sanders’ supporters and Clinton obscures the stakes and presents Democrats with a special challenge.

Their victories (compare 2008 with 2010, or 2012 with 2014) depend on high participation among younger voters who are turned on to Sanders and, in many cases, turned off to Clinton. The pro-Sanders young are unlikely to vote Republican, but if too many stay home in November, much of what Sanders and Clinton believe in could be consigned to the dustbin.