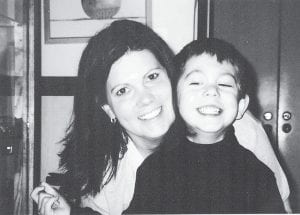 Six-year-old Oscar Jimenez Jr. was beaten to death in California, then buried under fertilizer and cement. Two-year-old Devon Shackleford was drowned in an Arizona swimming pool. Jayden Cangro, also 2, died after being thrown across a room in Utah.

In each case, as in many others every year, the alleged or convicted perpetrator had been the boyfriend of the child’s mother – men thrust into father-like roles which they tragically failed to embrace.

Every case is different, every family is different. Some single mothers bring men into their lives who lovingly help raise children when the biological father is gone for good.

Nonetheless, many scholars and front-line caseworkers interviewed by The Associated Press see the abusive-boyfriend syndrome as part of a broader trend that deeply worries them. They note an ever-increasing share of America’s children grow up in homes without both biological parents, and say the risk of child abuse is markedly higher in the nontraditional family structures.

“This is the dark underbelly of cohabitation,” said Brad Wilcox, a sociology professor at the University of Virginia. “Cohabitation has become quite common, and most people think, ‘What’s the harm?’ The harm is we’re increasing a pattern of relationships that’s not good for children.”

The existing data on child abuse in America is patchwork, making it difficult to track national trends with precision. The most recent federal survey on child maltreatment tallies nearly 900,000 abuse incidents reported to state agencies in 2005, but it does not delve into how rates of abuse correlate with parents’ marital status or the makeup of a child’s household.

Similarly, data on the roughly 1,500 child-abuse fatalities that occur annually in the United States leaves unanswered questions. Many of those deaths result from parental neglect, rather than overt physical abuse. Of the 500 or so deaths caused by physical abuse, the federal statistics do not specify how many were caused by a stepparent or unmarried partner of the parent.

However, there are many other studies that, taken together, reinforce the concerns. Among the findings:

– Children living in households with unrelated adults are nearly 50 times as likely to die of inflicted injuries as children living with two biological parents, according to a study of Missouri abuse reports published in the journal of the American Academy of Pediatrics in 2005.

– Children living in stepfamilies or with single parents are at higher risk of physical or sexual assault than children living with two biological or adoptive parents, according to several studies co-authored by David Finkelhor, director of the University of New Hampshire’s Crimes Against Children Research Center.

– Girls whose parents divorce are at significantly higher risk of sexual assault, whether they live with their mother or their father, according to research by Robin Wilson, a family law professor at Washington and Lee University.

“All the emphasis on family autonomy and privacy shields the families from investigators, so we don’t respond until it’s too late,” Wilson said. “I hate the fact that something dangerous for children doesn’t get responded to because we’re afraid of judging someone’s lifestyle.”

Census data leaves no doubt that family patterns have changed dramatically in recent decades as cohabitation and single-parenthood became common. Thirty years ago, nearly 80 percent of America’s children lived with both parents. Now, only two-thirds of them do. Of all families with children, nearly 29 percent are now one-parent families, up from 17 percent in 1977.

The net result is a sharp increase in households with a potential for instability, and the likelihood that adults and children will reside in them who have no biological tie to each other.

“I’ve seen many cases of physical and sexual abuse that come up with boyfriends, stepparents,” said Eliana Gil, clinical director for the national abuse-prevention group Childhelp.

“It comes down to the fact they don’t have a relationship established with these kids,” she said. “Their primary interest is really the adult partner, and they may find themselves more irritated when there’s a problem with the children.”

That was the case with Jayden Cangro.

In July 2006, his mother’s boyfriend, Phillip Guymon, hurled the 2-year-old nine feet across a room in Murray, Utah, because he balked at going to bed. The child died from his injuries.

Jayden’s mother, Carly Moore, has undergone therapy since the killing. Yet she continues to second-guess herself about her two-year relationship with Guymon.

“There’s so much guilt,” she said in a telephone interview. “I never saw him hit my kids, ever. But he was gruff in his manner – there were signs that he wasn’t most pleasant person for kids to be around.”

Guymon has been sentenced to five years in prison for seconddegree felony child abuse homicide. Moore thinks the penalty is far too light.

“It’s a hard thing,” she said, recalling Jayden’s death. “You go off to work, you say, ‘See you later,’ and then everything’s completely shattered in a split second.”

Some women can’t see the trouble even when it’s right in front of them.

Jennifer Harvey of Springfield, Mo., acknowledged in court last summer that she continued to date a man for two months after becoming suspicious that he had killed her 18- month-old son, Gavin.

“I was in denial,” said Harvey, who was placed on five years’ probation for not acting on her suspicions. The boyfriend, Joseph Haslett, was sentenced to life in prison for suffocating the toddler with a headlock.

The slaying of toddler Devon Shackleford in 2004 was premeditated.

Derek Chappell, who was sentenced to death this month, considered Devon an obstacle to an on-again, off-again relationship with the boy’s mother, and drowned him in an apartment complex’s swimming pool in Mesa, Ariz.

The mother, Kristal Frank, has created a Web site in memory of her son, full of reminiscences and snapshots. Chappell is referred to only as “that inhumane thing.”

Such cases trigger a visceral reaction, but there are no simple solutions. Some of the worst cases of child abuse involve biological parents, and examples abound of children thriving in nontraditional households

“There’s no going back to the past,” said Washington and Lee’s Robin Wilson. “We don’t tell people who they can cohabit with. We don’t tell them they can’t have children out of wedlock.”

There are, of course, some initiatives aimed at reducing the percentage of children raised by single parents. That’s one of the goals of the Bush administration’s Healthy Marriage Initiative.

“The risk (of abuse) to children outside a two-parent household is greater,” said Susan Orr, one of the top child-welfare specialists in the Department of Health and Human Services. “Does that mean all single parents abuse their children? Of course not. But the risk is certainly there, and it’s useful to know that.”

As with many local programs, the federal effort encourages single parents to at least consider marriage, while other programs focus on broadening the support network for single parents. One long-standing initiative, the Nurse-Family Partnership, has lowered abuse rates by arranging for nurses to visit low-income, first-time mothers throughout their pregnancy and after their child is born.

Many social workers say the emphasis should be on nurturing healthy relationships, whether or not the parent is married.

“The primary thing is to have adults around who care about these kids, whatever shape it takes,” said Zeinab Chahine, who was a New York City child-protection caseworker and administrator for 22 years before taking a high-level job in July with Casey Family Programs.

Chahine said caseworkers need to learn as much as possible, in a nonconfrontational manner, about the personal dynamics in at-risk households. Is there an unmarried partner who spends time there, or a newly arrived stepparent? Does that person care about the children, or consider them a nuisance? Is a criminal background check warranted?

“We start from perspective that the mom is as concerned about her kids as we are,” Chahine said. “We can try to help her see the need for us to look into the situation.”

Judith Schagrin, a Baltimorebased social worker engaged in child welfare for 24 years, said live-in boyfriends can be valuable resources for a single mother and her children. Some even have been awarded custody of children as an alternative to foster care while the mother is in jail.

“We look at the relationship the kid has with whomever is around – is it supportive or destructive?” Schagrin said. “Does the mother have a long-term, stable relationship with this individual, or does she have rotating list of partners coming in and out?”

In the real world, however, learning crucial details about a potentially fragile family is not easy.

“The field struggles with the balance between intrusion in private matters and awareness of significant risks to the child,” said Fred Wulczyn, a research fellow at the University of Chicago’s Chapin Hall Center for Children.

“With a social worker who’s in the house on a once-a-month basis, how good do we expect our diagnostics to be?” Wulczyn asked. “Achieving the right bal- ance, so you never have to ponder ‘What if?’ – that’s hard to do.”

The sensitivity of probing into private lives is one of many problems underlying the lack of definitive national data that correlates child abuse with parents’ marital status and household makeup. Some conservative commentators say “political correctness” is partly to blame – namely a reluctance to press for data that might reflect negatively on single motherhood.

Another problem is lack of thoroughness and consistency among the states as they forward abuse reports to federal agencies. Differing definitions of “household” and varying efforts to ascertain marital status result in a statistical “hodgepodge,” according to Elliott Smith, who oversees a national archive of childabuse research at Cornell University.

Among child-welfare specialists, there is hope that the statistical gaps will be filled by a comprehensive federal survey, the National Incidence Study, that will be completed next year.

The previous version of the study, released in 1996, concluded that children of single parents had a 77 percent greater risk of being harmed by physical abuse than children living with both parents. But the new version will delve much deeper into the specifics of family structure and cohabitation, according to project director Andrea Sedlak.

“We can ask the questions,” Sedlak said. “But it’s hard to look at cohabiting. It could well be there will be too much missing data to make definitive statements.”

“These boyfriends increasingly have been raised without fathers and been abused themselves,” said Patrick Fagan, a family-policy specialist with the conservative Family Research Council. “Among the inner-city poor, the turnover of male partners is high. Where’s a boy getting the model of what a father is like?”

Oscar Jimenez Jr., the San Jose, Calif., boy found buried under cement and fertilizer, did have a biological father who was devoted to him. But the father, Oscar Sr., separated from Oscar Jr.’s mother in 2002 and was prevented from seeing his son in the weeks before the boy’s death in February, allegedly from a beating by live-in boyfriend and exconvict Samuel Corona.

The mother, Kathyrn Jimenez, says she, like her son, was abused by Corona, yet she has pleaded guilty to three felony charges for assisting him – driving with him from San Jose to Phoenix to hide her son’s remains, then keeping quiet about the killing for months.

Kathryn Jimenez was in custody when Oscar Jr.’s funeral took place Sept. 29. She didn’t hear the plea of a longtime family friend.

“Listen carefully to the message,” Olessia Silva said at the service. “To all the mothers in this world who may find themselves in a difficult situation or harmful relationship: know that there is always, always someone willing to help if you would just reach out.”