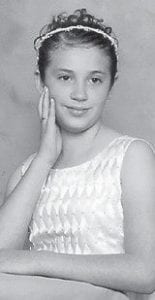 Eleven-year-old Courtney Jackson, a fifth-grade student at West Whitesburg Elementary School, recently was selected to attend the 2009 People to People World Leadership Forum in Washington, D.C., because of her high academic standing and promising leadership potential. She is also a member of the academic team and received first place in English composition at the regional academic tournament. Her parents are Donald and Daisy Jackson of Kingscreek, and her grandparents are Cleo Roark, also of Kingscreek, and the late Burnett Hogg.