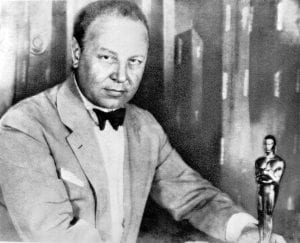 This 1928 picture shows German actor Emil Jannings with the first Oscar during the Academy Award presented for his 1927 film “The Way of All Flesh.” (AP Photo)

This week in 1929, the Academy of Motion Picture Arts and Sciences hands out its first awards, at a dinner party for around 250 people held in the Blossom Room of the Roosevelt Hotel in Hollywood, California.

The brainchild of Louis B. Mayer, head of the powerful MGM film studio, the Academy was organized in May 1927 as a non-profit organization dedicated to the advancement and improvement of the film industry. Its first president and the host of the May 1929 ceremony was the actor Douglas Fairbanks, Sr. Unlike today, the winners of the first Oscars–as the coveted gold-plated statuettes later became known–were announced before the awards ceremony itself.

At the time of the first Oscar ceremony, held May 16, 1929, sound had just been introduced into film. The Warner Bros. movie The Jazz Singer – one of the first “talkies” – was not allowed to compete for Best Picture because the Academy decided it was unfair to let movies with sound compete with silent films. The first official Best Picture winner (and the only silent film to win Best Picture) was Wings, directed by William Wellman. The most expensive movie of its time, with a budget of $2 million, the movie told the story of two World War I pilots who fall for the same woman. Another film, F.W. Murnau’s epic Sunrise, was considered a dual winner for the best film of the year. German actor Emil Jannings won the Best Actor honor for his roles in The Last Command and The Way of All Flesh, while 22-year-old Janet Gaynor was the only female winner. After receiving three out of the five Best Actress nods, she won for all three roles, in Seventh Heaven, Street Angel and Sunrise.

A special honorary award was presented to Charlie Chaplin. Originally a nominee for Best Actor, Best Writer and Best Comedy Director for The Circus, Chaplin was removed from these categories so he could receive the special award, a change that some attributed to his unpopularity in Hollywood. It was the last Oscar the Hollywood maverick would receive until another honorary award in 1971.

The Academy officially began using the nickname Oscar for its awards in 1939; a popular but unconfirmed story about the source of the name holds that Academy executive director Margaret Herrick remarked that the statuette looked like her Uncle Oscar.