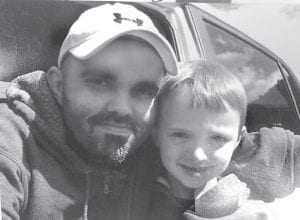 The Letcher County Sheriff ’s Office released this photo of Floyd Junior Sexton and his eight-year-old son Nicholas in December. The two were found in Texas this week.

Police in Texas have found an eight-year-old boy and his father who haven’t been seen in Letcher County since October. The father is wanted in the November murder of a Floyd County man.

Police found Nicholas Sexton and his father Floyd Junior Sexton, 33, in Potter County, Texas on March 3. Letcher County Sheriff ’s Deputy Eugene Slone said Nicholas Sexton will remain in Texas until his grandmother arrives to take custody of him. Floyd Sexton Jr. will be extradited to Kentucky along with Jennifer Gayle Jernigan, who is also charged in the murder of Bill Collins of Leburn.

“On March 3 at about 1:17 p.m., a Potter County Sheriff ’s deputy conducted a traffic stop on a 2006 Saturn Vue, silver in color at I-40 West and Bell Street. The vehicle was travelling eastbound on I-40 and was occupied by a white male, Floyd Junior Sexton, age 33, a white female, Jennifer Gayle Jernigan, age 40 and two juvenile males, one age 8 and the second age 13. Both children appeared to be in good health and uninjured.

“The deputy ran a standard warrants check on both adults and found they were both wanted out of Floyd County, Kentucky. Sexton had outstanding warrants for a Parole Violation and Homicide warrant and Jernigan had an outstanding warrant for Homicide. Both were arrested without incident and booked into the Potter County Detention Center for the outstanding warrants, where they will be held for arraignment and extradition back to Kentucky. The two children were turned over to Child Protective Services and they are working on getting them reunited with family members in Kentucky.”

Nicholas Sexton and his father had been staying with Floyd Junior Sexton’s mother, Lillie Mae Adams, until Adams and her son had a disagreement in mid-October, said Letcher County Sheriff ’s Deputy Barry Engle.

Adams told police that Floyd Junior Sexton had custody of his son, but that as part of the agreement her son and grandson were to live with Adams at her house, located at 186 Allen Branch in Whitesburg, Engle said.

Adams couldn’t produce documentation proving that as part of the custody agreement the Sextons were to live with Adams, Engle said. She did obtain an emergency custody order signed by a judge, but it hasn’t been served.

Three or four weeks after the Sextons were entered into the National Crime Information Center (NCIC) system, police in Letcher County were informed that Floyd Junior Sexton was in Prestonsburg, but police didn’t find him.

A few months later, Sexton was released from prison and placed on supervised probation beginning August 1 and ending in June 2017. He has since been declared “absconded” by the Kentucky Department of Corrections.

Police later arrested John Tate Maggard, 28, of McRoberts, and charged him with complicity to murdering Collins, of Leburn. Floyd Junior Sexton is wanted for murder in the case, while a woman, Jennifer Gayle Jernigan, is being sought on a complicity to murder charge.

The Floyd County Times reported on November 26 that Maggard helped Sexton wrestle with Collins as the two suspects allegedly attempted to hold Collins in a vacant house. Police say Sexton later shot Collins two times and left the scene in a vehicle driven by Jernigan.