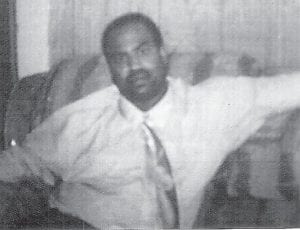 Walter Johnson Jr. of Atlanta died in a shooting at a Jenkins home in 2011. Two have pleaded guilty to the crime.

A Georgia man has been found not guilty of murdering a friend who died in Jenkins from a gunshot wound in March 2011.

After deliberating for an hour and a half Tuesday afternoon, a Letcher Circuit Court jury made up of 11 women and one man acquitted Alfred “New York” White, 46, of Jonesboro, Ga., in the shooting death of Walter Johnson Jr., 39, of Atlanta.

“He’s ecstatic, very relieved,” said Will Collins, and attorney for White. “He was steadfast to the end in maintaining his innocence.”

White, who was also represented in court by attorney Richard Counts, testified in Monday that he does not know who fired the gunshot that killed Johnson on March 24, 2011. He told the jury that he, Johnson and Angela Mays, 31, were sitting at a kitchen table inside a doublewide trailer located at 926 Premier Subdivision in Jenkins when Johnson was shot around 2 p.m. Mays and her fiancé, Tom Blair, were living at the home with David Michael Wyatt, whose late mother owned the trailer.

White said he and Johnson were discussing what White should buy his wife for her birthday when he heard a “pow.”

“I suggested women love shoes,” said White. “He said you know during this time in the winter you ought to think about getting her some boots. All of a sudden I heard pow.”

White said that after he heard the noise he asked what it was. He said Johnson sat in a kitchen chair with a stone look on his face until he began moving around and fell out of his chair.

“I became greatly concerned,” White testified. “I said ‘Call 9-1-1.’ I ran out the door looking for David Wyatt. It is my understanding he was a registered nurse.”

White said Blair and Wyatt had been in the living room area and ran out of the house soon after the shot was fired.

“At the time I didn’t know who was the shooter,” said White. “They both took off at the same time. There was one shot.”

White said he tried to get Wyatt and Blair to help Johnson.

“My friend was lying on the floor back there,” he said. “He needed help. I was pleading for them to help.”

During the trial, charges against White of robbery and tampering with physical evidence were dismissed. A bond hearing was scheduled to be held for White on a separate charge of possession of a handgun by a convicted felon.

“Just prior, we were talking about my son’s drawings,” said Mays.

According to Mays, Wyatt was getting something to drink out of the refrigerator when she heard a shot being fired.

Mays said she then asked Johnson if he wanted her to call 9-1-1. He said no and then said yes, according to Mays.

“New York was standing right there with a gun in his hand,” said Mays.

“When I got in there, there was a rubber band with money,” said Mays.

Mays admitted to taking $1,200 from Johnson after he was shot. She also admitted to hiding the money.

Blair testified that after he heard White and Johnson argue on March 24, he called Johnny Greer of Burdine to see if he could get pain pills for Blair. Greer stopped by the trailer, took money from Blair to buy 30-milligram pills of oxycodone and left, Blair said.

Greer testified Monday that he had stopped by the trailer the morning of the shooting and took about $130 from Blair and was supposed to be back in half an hour with Xanax.

“Tom owed me money so I had no intentions of coming back,” said Greer.

Mays testified that she was supposed to take Johnson and White to a bus station on March 24, but she was waiting for some pills to be delivered before she drove them.

Blair said he sat down at the kitchen table, lit a cigarette and was waiting for Greer to return with pills when he heard the shot.

“Angie was sitting across from me and Walter was beside me,” said Blair. “Angie and Walt were looking at pictures her son had drawn the night before.”

Blair testified that after he heard what sounded like a firecracker, Johnson said he thought his gun had misfired and asked if everyone was all right.

“He asked ‘Did that nigger just shoot me?’” said Blair.

“And that is when I realized Alfred had a gun,” said Blair. “(I) got scared and ran. I didn’t know if he was going to shoot the rest of us. I just took off and didn’t look back.”

Wyatt testified that he walked out of the residence after he realized Johnson had been shot once in the back. Wyatt said he had just returned to the trailer from taking Mays’s mother and 14-year-old son to Mays’s mother’s residence in Goodwater Falls in Jenkins before the shooting occurred.

“I was getting ready to get me a pop out of the refrigerator and opened the refrigerator,” said Wyatt. “(I) heard an explosion. I thought maybe someone had let a firecracker off. I saw New York standing behind Walt with a gun. I didn’t exactly know what had happened.”

Wyatt testified that Johnson had said, “My gun went off. My gun misfired.”

Wyatt said Mays tried to call 9-1-1 but White took the telephone from her. Wyatt said White then waved the gun back and forth at Mays, Blair and Wyatt.

“ Every time the gun waved by me I was unsure whether I was going to be shot,” said Wyatt.

“Angela had the phone behind her and managed to dial 9-1-1,” said Wyatt.

Wyatt said he managed to get outside the residence and was waiting by the mailbox for emergency responders to arrive when White came outside and pointed the gun at Wyatt.

“I did fear for my life,” said Wyatt.

Robert “Snoop Rob” Rose told the jury Friday that White had asked at least five people in March of 2011 to help him kill Johnson. Rose, who had worked as an informant for the Letcher County Sheriff ’s Department, testified Oct. 4 that White asked Rose about a week before Johnson was shot to provide White a ride out of Jenkins after Johnson was killed. Rose said White told him he would get $10,000 for providing White with a ride out of Letcher County. Rose testified that he didn’t take White seriously when he talked about killing Johnson.

“I didn’t think something like that would happen,” said Rose. “I thought it was a crazy idea.”

Mays and Blair were supposed to help rob Johnson after he was shot, Rose said. Blair, of No. 3 Hill, Jenkins, testified Friday that he and Mays were supposed to wait to call 9-1-1 so White could get away from the scene and then they were to call White later and split the money with him. White had also asked Johnny Greer and Shannon Johnson to be a part of the plan, Rose said.

Blair testified that he had gone with White, Mays and Wyatt to a softball field at Joe’s Branch on March 24, the day of the shooting.

“He said he had some money and crack hid up there,” said Blair, adding that White didn’t find what he was looking for at the softball field.

“He was pretty upset,” said Blair. “He said he had been robbed.”

Like Rose, Blair and Mays testified that they didn’t take White seriously when he mentioned wanting to kill Johnson.

“Everything I did I admitted to,” said Mays. “I had no help in the murder of Walter Johnson, therefore I felt that my role could have played a part by not believing Alfred. That yes, I could have facilitated his murder by not doing my job as a citizen and having them here selling drugs in the first place and not running them off and not doing several things I could have (and) should have done that we wouldn’t be sitting here today. But we are so I feel like I take my responsibility for what I did.”

Mays testified that Johnson and White used the trailer as a “trap house” to sell cocaine and Johnson gave her $500 for letting them stay at her house for about a week in March 2011. The money included payment for Mays taking them to the bus station.

“I’m not sure the amount, but it was a lot,” said Mays. “ They made substantial sales.”

Mays said she never saw Johnson use the crack cocaine he brought to the trailer.

“Walter was in charge,” said Mays. “Walter just had some money in on it.”

Mays said Johnson kept the drug supply and complained to Mays that White was smoking all of the profits. Mays said White constantly used the crack cocaine.

“Only when he was sleeping did he not use,” said Mays.

White testified that he only used crack cocaine with other people and didn’t use it alone.

Mays and Blair have each been sentenced to 10 years in prison for their roles in Johnson’s death. Blair has admitted to taking money from Johnson after he was shot and spending that money on drugs.

Mays pleaded guilty June 26 to first-degree robbery, a Class B felony, and criminal facilitation to murder and tampering with physical evidence, both Class D felonies. She is serving her time in prison at the Kentucky Correctional Institute for Women at Peewee Valley in Shelby County. She will become eligible for parole on Sept. 26, 2019 after serving 85 percent of the 10-year robbery-related conviction.

Blair pleaded guilty September 13 to charges of first-degree robbery, criminal facilitation to murder, possession of a handgun by a convicted felon and complicity to tampering with physical evidence. Blair, who has not yet been assigned to a state prison, is being housed at the Letcher County Jail. He, too, must serve 85 percent of the robbery sentence before becoming eligible for parole.