Accused robber is ordered held in jail under $500,000 cash bond 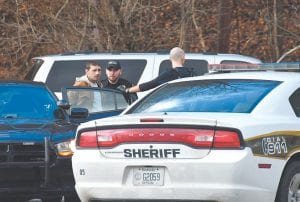 ALLEGED ROBBER IN CUSTODY — Robbery suspect Dustin C. Banks (left) was being removed from a Jenkins City Police cruiser to a Letcher County Sheriff ’s car for transport the Letcher County Jail in Whitesburg, where Banks, 24, is being held under a $500,000 cash bond after a robbery at the Rite Aid store in Jenkins.

A 24-year-old Letcher County man will appear in court Friday afternoon to answer charges filed against him after he allegedly tried to rob a Jenkins pharmacy of its entire supply of the highly addictive prescription drug Xanax.

Police say Dustin Cleburne Banks walked into the Rite Aid store in Jenkins late Monday morning and told pharmacy workers he would “blow” their “brains out” if they didn’t give him the store’s supply of Xanax, the brand name of an anti-anxiety drug widely abused because of its sedative effect. He left the store after an employee handed over a large quantity of drugs and was arrested later Monday afternoon at another location in Jenkins.

Police were told about the robbery at 11:55 a.m. on Monday. Letcher County Deputy Sheriff Alicia Congleton said she and other officers were met at the scene by Rite Aid pharmacy technicians who appeared “very shaken up” after having their lives threatened.

“They were torn all to pieces,” she said. “He went in there and told them, ‘Give me all your Xanax’s or I’m going to blow your brains out.’ He specifically said ‘I’ll blow your (bleeping) brains out,’” Congleton added, explaining that Banks, whose last known address was 27 Welch Hollow in Neon, “had his hand in his pocket portraying” that he was armed with a gun.

Banks was arrested and charged with first-degree robbery by Jenkins Police Chief Jim Stephens and transported to the Letcher County Jail by Deputy Congleton. He is scheduled to appear in Letcher District Court at 1 p.m. Friday at a hearing ordered by Judge Kevin R. Mullins. On Tuesday, Mullins set bond for Banks at $500,000 cash after determining he is a “flight risk and danger to the community.”

In a post-arrest complaint filed with the district court, Chief Stephens charged that Banks entered the “Rite Aid at Jenkins and demanded Xanax, stating he had a gun and would shoot the clerk if not given what he wanted.”

Congleton said Banks tried to disguise himself by wearing a black North Face hooded jacket and eyeglasses when he walked into the Rite Aid. She also said Banks had “been living right in that area” before committing the robbery. “It (Rite Aid) was in walking distance of where he was staying,” Congleton said.

Banks was arrested after police found him visiting in a home on Cove Avenue. Congleton said that before Banks robbed the Rite Aid pharmacy he had gone inside the Boggs Pharmacy at Cavalier Drug Store, which is located almost directly across the street.

“Something made him change his mind,” she said.