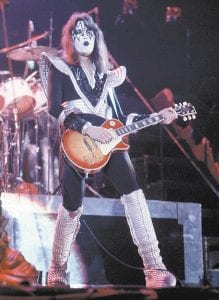 Photos above and below show Paul “Ace” Frehley just a few years after he helped form the hard-rock glam band KISS and how he appears in concert today. Above, Frehley peforms with a Les Paul guitar during a February 1977 concert at the Civic Center in Harford, Conn. Below, Frehley performs in concert in Lancaster, Pa. Frehley will perform in concert at River Park in Whitesburg on May 2. (AP)

There will be more than 600 people at the Ace Frehley concert in Whitesburg on Thursday night, but don’t expect to see all of your neighbors — most of the people who had bought tickets by Tuesday were from 15 other states and two other countries.

Concert promoter Greg Napier said tickets have gone to states from Georgia to California, but fans coming the farthest are from Sweden.

“They said they always wanted to travel in the United States, and wanted to see Appalachia, and they’re big KISS fans,” Napier said, referring to the legendary rock band Frehley helped found, but with which he no longer plays.

Only about 30 of the 655 tickets issued by Tuesday were to Letcher County residents, Napier said. In addition to Sweden, the rest of the tickets were sold all up and down the Eastern Seaboard, on the West Coast, in surrounding states, and in Canada. He said a retired couple from Illinois had already come to town in their recreational vehicle and were exploring the area before attending the show. 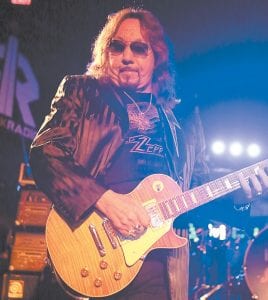 “I have never seen the excitement to see an artist like this,” Napier said. “Eight- or nine-year-old kids are huge KISS fans, and parents are like, ‘I can’t believe I get to take my kids to see (Frehley) in an outdoor concert.’”

He said the Whitesburg show is the smallest venue Frehley has ever played. The stage will be the same one used in shows in New York and other venues across the U.S., and the next night Frehley will be playing in Nashville. Tickets there, Napier said, start at $68, more than double the $30 cost of general admission here.

Napier said he was touched by Frehley’s willingness to contact a fan who had bought tickets for the show in Whitesburg, but was diagnosed with pancreatic cancer. The man’s family asked if there was any way that Frehley could send him a video, since he was not expected to live until the concert. He did, and Frehley sent back a personal message for him. Napier showed The Mountain Eagle the video Frehley sent to the man, telling him to be strong, that he was praying for him and that he would see a lot of good concerts in heaven.

His family will be among the crowd at the show Thursday night.

Napier said the stage will roll in on trucks Thursday morning, and be set up. The road past the Whitesburg water plant will be closed, and concertgoers will have to enter from the bypass.

Tickets are still available online from aneveningwithconcertseries.com, and will be available at the gate.