Acetaminophen drops to get ax 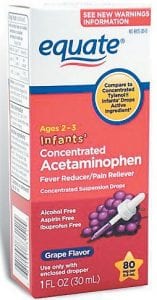 Makers of cold and fever medications are discontinuing infant drops of medicines containing the pain reliever and fever reducer acetaminophen.

Johnson & Johnson and other makers of cold and fever medications are discontinuing infant drops of medicines containing acetaminophen in an effort to avoid confusion that can lead to dangerous overdoses.

The industry association for over-the-counter medicine companies said its members will begin phasing out the liquid drops later this year.

After the transition is complete, companies will only sell a single formula for all children under the age of 12. Currently, J&J and other companies market infant formulations that contain half the amount of acetaminophen as that found in regular children’s formula.

Acetaminophen is a ubiquitous pain reliever and fever reducer found in Tylenol, Nyquil and thousands of other medicines used to treat flu, headache and sore throat. While generally safe when used as directed, acetaminophen is the leading cause of liver failure in the U.S. and overdoses send more than 50,000 people to emergency rooms each year.

The announcement last week appeared timed to head off debate about the products at a Food and Drug Administration meeting scheduled for later this month. The FDA has called the meeting to discuss whether additional instructions and safety labeling are needed when acetaminophen products are used in children younger than 2.

The infant products now on the market usually come with a dropper and are designed to deliver 80 milligrams of acetaminophen per 0.8 milliliter of liquid.

Beginning mid- year, drugmakers will stop producing those formulas and only the standard children’s formula, which contains 160 milligrams per 5 milliliter. Parents can accidentally give infants too much of the ingredient if they do not read the instructions carefully or use the dropper with a different formulation of the drug.

“We are committed to providing parents and caregivers with the tools and information they need to help give their children the right amount of these medicines,” said Scott Melville, president of the Consumer Healthcare Products Association. Member companies include J&J, Novartis, Procter & Gamble and makers of generic cold medicines.

The elimination of acetaminophen based infant formula marks the second time the drug industry has pulled its products off the market ahead of federal action. In 2007, the same industry group announced it would discontinue all infant decongestant medicines, ahead of an FDA meeting to look into deaths with the products.