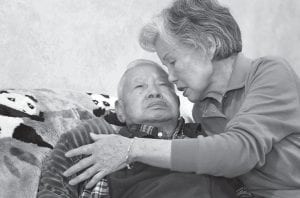 Shou-Mei Li, right, cares for her husband Hsien-Wen Li, who is an Alzheimer’s patient, at their home in San Francisco. Dementia is poised to become a defining disease of a rapidly aging population — and a budget-busting one for Medicare, Medicaid and families. (AP Photo)

As her mother’s Alzheimer ’s worsened over eight long years, so did Doreen Alfaro’s bills: The walker, then the wheelchair, then the hospital bed, then the diapers — and the caregivers hired for more and more hours a day so Alfaro could go to work and her elderly father could get some rest.

Alfaro and her husband sold their California house to raise money for her mother’s final at-home care. Six years later, the 58-year-old Alfaro wonders if she eventually develops Alzheimer’s, too, “what happens to my care? Where will I go?”

Dementia is poised to become a defining disease of the rapidly aging population — and a budget-busting one for Medicare, Medicaid and families. Now the Obama administration is developing the first National Alzheimer’s Plan, to combine research aimed at fighting the mind-destroying disease with help that caregivers need to stay afloat.

“ This is a unique opportunity, maybe an opportunity of a lifetime in a sense, to really have an impact on this disease,” says Dr. Ronald Petersen of the Mayo Clinic, who chairs a committee that later this month begins advising the government on what that plan should include.

An estimated 5.4 million Americans have Alzheimer’s or similar dementias. It’s the sixth-leading killer. There is no cure; treatments only temporarily ease some symptoms. Barring a research breakthrough, those numbers will worsen steadily as the baby boomers gray: By 2050, anywhere from 13 million to 16 million Americans are projected to have Alzheimer’s, costing a $1 trillion in medical and nursing home expenditures.

But that’s not the full toll. Sufferers lose the ability to do the simplest activities of daily life and can survive that way for a decade or more, requiring years of care from family, friends or paid caregivers. Already a recent report finds that nearly 15 million people, mostly family members, are providing more than $200 billion worth of unpaid care.

Thousands of those caregivers have turned out at public meetings since early August — and at a “telephone town meeting” organized by the Alzheimer’s Association that drew 32,000 people — pleading for a national Alzheimer’s strategy to bring changes.

They demand to know why the National Institutes of Health spends about six times more on AIDS research than on Alzheimer’s, when there are good drugs to battle back the HIV virus but nothing comparable for dementia.

Overwhelmingly, they ask for resources to help Alzheimer’s patients live their last years at home without ruining their caregivers’ own health and finances.

“Either you’re rich and can afford $25 an hour for care at home, or you send him to a facility. We’re in the middle of the road,” says Shirley Rexrode of suburban San Francisco, whose 85-year-old father, Hsien- Wen Li, was diagnosed with Alzheimer’s nearly three years ago.

Adult day care didn’t work out — even at $90 a day, the only place with an opening couldn’t handle the behaviors of Alzheimer’s. Rexrode’s mother, Li’s primary caregiver, already has suffered some depression.

“We just have to muddle through, but we don’t know how long we can,” Rexrode says.

And while Medicare will pay for doctor bills and medications, even getting to the doctor can be a hurdle. When her 89-year-old mother with advanced Alzheimer’s developed a urinary tract infection, Susan Lynch couldn’t find a doctor willing to come to her parents’ home in Fall River, Mass. Lynch flew there from her Gaithersburg, Md., home but couldn’t carry her mother down the stairs. A private ambulance service didn’t have an opening for weeks. Lynch wound up calling the town ambulance for a costly but Medicarecovered trip to the emergency room.

Federal health officials, who promise a first draft of the national plan by December, say they’re getting the message.

“Folks desperately, desperately want to be able to provide the care themselves,” says Donald Moulds, a deputy assistant secretary at the Department of Health and Human Services who oversees the project. “It’s very, very hard work. Figuring out better mechanisms for supporting people who are trying to do that work is, one, the right thing to do.”

It also may be cheaper for taxpayers. Nursing homes not only are pricier than at- home care, but many families only can afford them through Medicaid, the health care program for the poor. Another key, Moulds says, is better care coordination as Alzheimer’s complicates the many other health problems of aging.

But given the budget crisis, the big question is whether any anti-Alzheimer’s strategy can come with enough dollars and other incentives attached to spur true change.

“That’s a concern, a very real one,” says Mayo’s Petersen.

The law that requires a national Alzheimer’s plan didn’t set funding, and Moulds is mum on a possible price tag. Almost complete is an inventory of all Alzheimer’s-related research and care reimbursement paid for by the U.S. government, to look for gaps that need filling and possible savings to help pay for them.

Other countries including England and Australia — and 25 U.S. states, by Moulds’ count — have developed their own Alzheimer’s plans. But the U.S. is taking a special look at France, where President Nicolas Sarkozy in 2008 pledged to invest 1.6 billion euros, about $2.2 billion, over five years for better diagnosis, research and caregiver support and training.

Moulds says U.S. families are telling him that any Alzheimer’s plan must bring better understanding of a disease too often suffered in isolation.

“What I want to see is mainly awareness, awareness of this disease and what it does not only to the individual but also to the network of family and friends that are going to care for the person,” says Alfaro, of Aptos, Calif.

“It should be as understood as diabetes, and as treatable,” adds Audrey Wiggins of Triangle, Va., whose father has and grandmother died of Alzheimer’s.