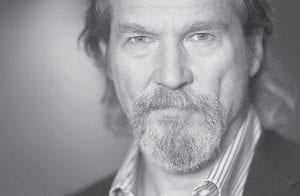 Actor Jeff Bridges posed for a portrait last week in Beverly Hills, Calif. Bridges is nominated for an Oscar for best actor for his role in “Crazy Heart.” (AP)

When director Scott Cooper approached him with the script for “Crazy Heart,” Jeff Bridges turned down the part of a lifetime.

Sure, the role of outlaw country burnout Bad Blake had great potential, but the project was just a hollow shell at that point.

“It was missing that essential part,” Bridges said. “There was no music to it, and if you didn’t have good music for this, no matter how good the story, it wasn’t going to be any good. So I took a pass on it.”

A short time later Bridges got a call from his old pal T Bone Burnett, the Grammy-winning music producer and soundtrack wizard known for his work with Americana roots music. Somehow Cooper had talked him into creating the music for the film, taking away the only obstacle for Bridges.

“This young guy (Cooper) who’d never made a film before showed up and convinced me he was going to make this film,” said Burnett, the musical genius behind “O Brother, Where Art Thou” and “Walk the Line.” ‘’I must be a sucker. How did he convince me of that? But he did, and he did, he actually made it.”

“Crazy Heart” off ered an even bigger challenge than acclaimed those films. The music had to be authentic beyond reproach. Bridges says Cooper sold the movie to him as the story of “the fifth Highwayman,” referring to the outlaw country supergroup of Johnny Cash, Willie Nelson, Waylon Jennings and Kris Kristoff erson.

That kind of credibility can’t be faked.

So Burnett created a songwriters table that included the director and star, and a handful of musicians and songwriters who have lived the life – guys like Stephen Bruton, John Goodwin, Greg Brown and others.

They started with Cooper’s script, based on the novel of the same name by Thomas Cobb, and built from there. Both a personal history and a unique musical signature for Bad Blake quickly took shape.

Burnett and Bridges turned to Bruton in these sessions, drawing on experiences and work that were similar to the fictional character’s. Bruton, who died last year, was fighting cancer at the time, but agreed to help Burnett, his childhood friend from Fort Worth, Texas.

“His dad had the record store in Fort Worth where we all hung out. Stephen was able to order Folkways records. At the time before the Internet there was a big book this thick on record store desks,” he said, holding his hands a foot apart, “and you could go through it. There were tens of thousands of titles there, and you’d have to really do a lot of research to figure out even what to look for in that book.”

Bruton always knew what page to turn to, though, and he continued those lessons for the writers and actors attached to “Crazy Heart.” In time Burnett pushed him to the forefront in shaping Bad’s musical persona.

“One of the things that (Bruton and Burnett) impressed upon me was the wide range of music Bad would’ve listened to,” Bridges said. “He was listening to Hank Williams and all the country guys, but he also listened to Ornette Coleman in Fort Worth, and Lightning Hopkins and a lot of blues, that kind of stuff . The taste was very varied.”

The originals that emerged from these sessions and rehearsals succeed as standalone songs, but also help push the film’s plot along. There’s the ethereal “Hold On You,” the good time rocker “Somebody Else,” the life lessons of “Fallin’ & Flyin’,” and the honky tonk bop of “Gone, Gone, Gone,” sung by Colin Farrell, who plays a million-selling former protege of Bad’s.

Bruton not only took on much of the responsibility for music, but was also charged with detecting moments of phoniness. Bruton’s cancer was in remission during shooting of the film and he was always at Bridges’ elbow, helping create one of the actor’s finest performances. Bridges has won a Golden Globe, Screen Actors Guild award and Oscar nomination for the portrayal.

“The main role model was Stephen who was right there everyday giving us ideas,” Bridges said. “And Scott also told him, Geez, Stephen, whenever you have any inkling about something you’d like to see, something that’s not right, let us know.’ I was the same way with it. It was right there. It was a wonderful thing to have.”

With most of the pieces in place, there remained one problem for the group that even Bruton couldn’t immediately solve: The movie had no theme song.

It was the music that was supposed to be the emotional crux of the film, and it had to be a doozey. Yet no one really had any ideas.

In stepped Ryan Bingham, a critically acclaimed Los Angelesbased country singer who was being considered for a small part in the movie. When Cooper gave him the script, he invited him to write a song if the inspiration hit.

Bingham went on the road with his band the Dead Horses and roughed together “The Weary Kind” after reading the script.

And then quite a bit of time passed.

“So I kind of thought that was it, I didn’t make the cut or whatever,” Bingham said with a smile.

Cooper eventually called and invited him over to Burnett’s. Bingham walked in and found himself in the middle of one of the film’s songwriting sessions. He had a disc with a few verses on it and before he knew it, Burnett was playing it for the group.

“I was like I’m either going to get to hang out or I’ll be out of here pretty quick,” Bingham said. “Thankfully they liked the song and they let me hang out all afternoon. They said let’s write some more songs and everybody pulled paper out and started to talk about this guy and where he’s going and writing songs. It was a blast, man.”

That story makes Burnett smile. It’s one of the small successes of “Crazy Heart,” a movie made against the odds, that Bingham’s career gets a boost from all this.

He’s already won a Golden Globe with Burnett and is up for an Academy Award for best original song.

“I’m always ready to accept a gift and Ryan’s song coming in, there’s a beautiful example of a gift,” Burnett said.