Adams hopes he can rebuild his guitar shop 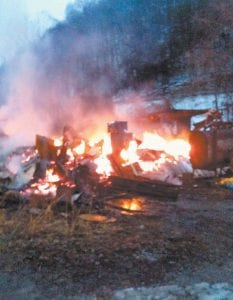 This two-story building at Van was destroyed by fire last Friday. Owner James Bennett Adams says he hopes the building, which was housing his guitar shop, can be rebuilt.

James Bennett Adams watched Friday evening as the two-story building he built with his son years ago burned to the ground.

“We lost a lot of memories there,” said Adams. “It’s a total loss. In about an hour and a half it was done.”

Adams and his oldest son, Rocky, built the structure located beside KY 15 at Van near the Adams residence more than 40 years ago. Adams said he had been working in his guitar shop all day and walked over to his house to talk to his wife, Della, who had just returned home from her job at Parkway Pharmacy in Whitesburg around 3:30 p.m. on Dec. 16.

“I had been talking to my wife for about 15 to 20 minutes,” said Adams. “Everything was fine. I looked and the whole shop was on fire — upstairs and downstairs. Fire and smoke were coming out of all of the windows.”

Adams believes the fire started in the heating system on the first floor. He would like to rebuild if possible.

For the last 15 years, under the name Delbe guitar, which is the first three letters of his wife’s name and the first two letters of his middle name, Adams has built hollow body electric guitars made from oak and maple. The most expensive guitar he makes sells for $3,500 and the least expensive one sells for $1,500. Adams said he can make a guitar in 30 days if he works on one for eight hours a day for an entire month.

He lost three guitars he was in the process of making. He said several finished guitars were stored at his house.

Adams also operated Mountain Recycling out of the same building, and once used the structure as a upholstery business for about 26 years under the name The Living Room House. Adams reupholstered furniture, sold new furniture and built living room suites.

Adams said he received about 30 telephone calls over the weekend from community members expressing their sympathy for the family’s loss.