Adams was on way home from parts run 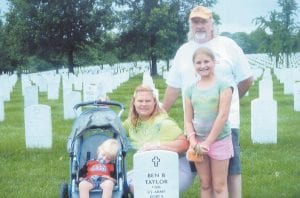 Herbie Adams, who died in a wreck on July 14 in Pound, Va., is pictured with his wife and two children at the gravesite of former Letcher County Sheriff Ben Buster Taylor during a recent visit to Arlington National Cemetery. Adams told his wife, Gina Vonda Adams, that he had always wanted to visit the cemetery, so they did on June 28. Pictured from left are two-year-old Zane Ellis Adams, Gina Vonda Adams, 10-year-old Tayler Lee Adams and Herbie Adams.

A 57-year-old Letcher County man was on his way back home after picking up coal truck parts when he was killed in a two-vehicle accident in Virginia last week.

“Mr. Boggs had stopped at the four-lane at the stop sign (near the dam of North Fork Reservoir) and proceeded to cross the four-lane and failed to yield the right of way,” said Conroy.

Conroy said Adams, who was not wearing a seat belt, was ejected when the vehicle rolled. Adams was pronounced dead at the scene of the accident. Boggs suffered minor injuries, Conroy said.

Adams’s wife, Gina Vonda Adams, said her husband had been to Virginia to pick up transmission parts for one of their coal trucks when the wreck occurred. The Adamses own H.A. Trucking and Contracting of Little Cowan. Adams operated the coal trucks along with his sons.

“His first priority was working with trucks, making sure his trucks were right,” said Mrs. Adams.

Herbie Adams was featured in a 2002 Appalshop documentary called “Coal Bucket Outlaw” that followed Adams as he operated a coal truck.

The Adamses also own H and T Stop ‘n Shop located across from Cowan Elementary School.

“He was there to support his kids,” she said.

She said Herbie Adams would go to the starting gate with his 10-year-old daughter, Tayler, and help her get ready to race.

“Daddy did it all,” Mrs. Adams said. “He was her cheering crowd.”

The Adamses visited Arlington National Cemetery on June 28, something Herbie Adams had wanted to do for a long time.

“It was just a wonderful trip,” said Mrs. Adams.

Mrs. Adams said Herbie Adams touched the lives of everyone he met. She said 812 people signed the guest book during he first night of visitation.

“He was the best husband, partner, friend and daddy there could have ever been,” said Mrs. Adams.

Herbie Adams was a son of the late Ray Adams and Virginia Lee Lawson, and was a member of the House of Jubilee Church in Hemphill and American Legion Post 152 in Whitesburg.

Funeral services were held July 17 at the Faith Community Church in Whitesburg. Burial was in the Adams family cemetery at Pine Mountain.