‘Addiction is not a character flaw,’ surgeon general says 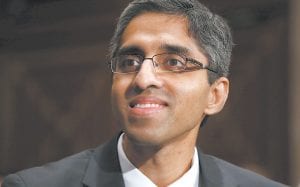 A new report by surgeon general Dr. Vivek Murthy (above) calls for a major cultural shift in the way Americans view drug and alcohol addiction. The report, “Facing Addiction in America,” details the toll addiction takes on the nation and explains how brain science offers hope for recovery. (AP Photo)

In what may be his last significant act as President Barack Obama’s surgeon general, Dr. Vivek Murthy released a report calling for a major cultural shift in the way Americans view drug and alcohol addiction.

The report, “Facing Addiction in America,” details the toll addiction takes on the nation — 78 people die each day from an opioid overdose; 20 million have a substance use disorder — and explains how brain science offers hope for recovery. While its findings have been reported elsewhere, including by other federal agencies, the report seeks to inspire action and sway public opinion in the style of the 1964 surgeon general’s landmark report on smoking.

With President- elect Donald Trump taking office, it’s uncertain whether access to addiction treatment will improve or deteriorate. Trump and the Republicanled Congress are pledging to repeal and replace the 2010 Affordable Care Act, which made addiction treatment an essential health benefit.

In an interview Wednesday, Murthy said he hasn’t spoken to Trump but looks forward to working with his administration to save lives with expanded access to treatment.

“We have made progress,”

Murthy said. “How do we keep that progress going? A key part is making sure people have insurance coverage.”

The Associated Press reviewed the report ahead of its official release. Here’s a look at what’s in it and some early reaction:

The surgeon general’s report refutes abstinence-only philosophies as unscientific and supports medications such as buprenorphine and methadone that are used to treat opioid addition. That may annoy supporters of traditional 12-step programs who see medications as substituting one addiction for another.

Medication- assisted treatment for opioid addiction can take time. “One study suggested that individuals who receive MAT for fewer than 3 years are more likely to relapse than those who are in treatment for 3 or more years,” the report states.

Staged interventions, like those depicted on TV, may backfire. Planned surprise confrontations “have not been demonstrated to be an effective way to engage people in treatment,” the report says. The trouble with the approach? According to the surgeon general’s report, it can heighten resistance and attack the selfworth of the addict.

Alcoholics Anonymous was founded in 1935 because mainstream medicine wasn’t treating alcohol disorders. That started a legacy of separating addiction treatment from the rest of medicine.

The report makes room for AA and other recovery support services, noting they don’t require health insurance and are free, but it also says they “are not the same as treatment and have only recently been included as part of the health care system.”

AA gets praise for adaptability. American Indians, for instance, have incorporated Native spirituality and allowed families to attend meetings. Research shows AA to be “an effective recovery resource,” the report concludes.

Alcohol tax policies get a nod in a section on evidence based prevention: “Higher alcohol taxes have also been shown to reduce alcohol consumption.” Other policies suggested by research include limiting the density of stores selling alcohol, banning Sunday sales and holding bars liable for serving minors.

The report suggests learning from alcohol and tobacco policies to find out what works to minimize harm as marijuana becomes legal.

Murthy supports easing existing barriers to marijuana studies, but said Wednesday that he’s worried the legalization movement is moving faster than research. “Marijuana is in fact addictive,” he said.

NOT A MORAL FAILING

Addiction is a chronic illness, not a character flaw or a moral failing, the report says. Stigma and shame have kept people from seeking help and weakened public investment.

Murthy issues a call to action in the preface: “How we respond to this crisis is a moral test for America. Are we a nation willing to take on an epidemic that is causing great human suffering and economic loss?”

“We have to change the way we talk about addiction and break the stigma to help more Americans suffering from this disease get the treatment and recovery they need,” Portman said.

“This affects all of America, but it really affects the Trump voter,” Kennedy said. Red states such as West Virginia, Ohio and Kentucky have the highest overdose rates, Kennedy said. Enforcing laws that require insurers to cover addiction treatment will be a test of Trump’s “promise to put average Americans ahead of corporate interestas,” said Kennedy.