Adkins: I’m the candidate who can beat Bevin 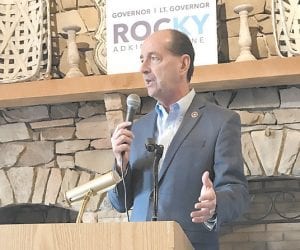 Rocky Adkins brought his campaign for governor to Whitesburg this week, addressing a crowd made up of both Democrats and Republicans. (Eagle Photo)

Speaking to an enthusiastic crowd of both Democrats and Republicans in Letcher County this week, eastern Kentucky native Rocky Adkins said he is the only candidate running for governor who can defeat incumbent Matt Bevin in November.

Adkins, the 59-year-old minority leader of the Kentucky House of Representatives, was in Whitesburg Monday night for a public fundraising event held at Pine Mountain Grill. He told the standing-roomonly crowd of about 75 that he is the only Democratic candidate who understands Kentuckians in the way that will be necessary to “send Matt Bevin packing” on November 6.

To get to the general election, Adkins first must defeat current state Attorney General Andy Beshear and former state Auditor Adam Edelen in the May Democratic primary. Referring to himself as a “moderate, middle-of-the-road, common sense type of guy,” Adkins said his platform will attract enough voters “from the river counties of western Kentucky,” the urban areas of central and northern Kentucky, and the coalfields of eastern Kentucky to defeat Bevin and “bring back dignity and respect to the governor’s office.”

“This race is not about Democrats or Republicans,” Adkins said. “This governor’s race is about people over politics.”

Adkins, a native of Sandy Hook in Elliott County, has been a state legislator since 1987, just a little more than four years after graduating from Morehead State University, where he was a starting point guard on the basketball team.

He recalled on Monday that when he announced his candidacy for governor before a crowd of about 1,200 people in Morehead on November 14 he experienced the same level of excitement — “those butterflies, those chill bumps” — he felt 36 years ago when he “came out of the locker room in Hartford, Connecticut” and heard the cheers of thousands of fans who were hoping the Eagles would upset the mighty Syracuse University Orangemen in the 1983 NCAA Tournament.

“I never thought I would be in a position to ask people to vote for me for governor,” he said.

Noting that he has been able to work across the political aisle throughout his career in Frankfort, Adkins pledged to the audience “to govern with a point guard’s mentality” and work to make everyone around him better. “You don’t see me, you see we,” he explained.

A former small coal operator and public school teacher, Adkins said he is running against Bevin because he “doesn’t believe in” his agenda of privatizing public schools and public pensions and wants to be a voice for the state’s “middle class.”

“I believe working families are worth fighting for,” he said.

Adkins said that while he would “focus like a laser” on eastern Kentucky as governor, he would work just as hard for the residents from other regions that make up the commonwealth.

“It’s a long way from Whitesburg to Paducah,” Adkins said, adding later, “I will be a governor from eastern Kentucky, but I will be governor for all of Kentucky. … We need a governor who understands rural Kentucky.”

Among rural Kentucky’s most urgent needs, said Adkins, is access to broadband, or high-speed Internet service in homes and businesses. He said the state needs to invest heavily in broadband technology so that parents of rural children no longer have to drive their “kids to McDonald’s to get Wi-Fi” so they can complete a homework project. “Folks, that is wrong,” he said.

Adkins also pledged to the audience that he would “keep fighting for coal and natural gas” while also working to “diversify” and “stabilize” eastern Kentucky’s economy to avoid the “peaks and valleys.”

“I can talk about that, because I’m a casualty,” he said, referring to his work in the coal industry.

Adkins was introduced to the audience by 94th District State Representative Angie Hatton of Whitesburg, who referred to him as “the best man to send” Governor Bevin packing out of Frankfort.

“He knows how to vote for us and he’s been doing it for years,” she said of Adkins.