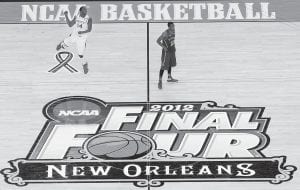 Another championship banner has been unfurled at Rupp Arena.

Blue-clad fans erupted into deafening cheers as the team pulled into the packed arena aboard a sleek blue bus emblazoned with “national champions.”

It was a joyous curtain call for a team led by a talented group of freshmen and sophomores. The NBA likely beckons next for several of them.

Each team member was introduced to loud ovations as players and coaches took the stage in the middle of the arena. Senior Darius Miller, a basketball net draped around his neck, toted the NCAA championship trophy to a table. Coach John Calipari pumped his fist and raised his arms in triumph as he basked in the cheers.

Calipari reminded the crowd that his goal three seasons ago when he took the Kentucky coaching job was to restore the Wildcats to the “gold standard” in college basketball and to raise more championship banners.

Then on cue, the 2012 title banner slowly unfurled from the rafters at Rupp as the Kentucky pep band played and fans cheered.

“ You people never cease to amaze me,” he told the crowd.

Calipari praised the chemistry of a team stocked with future NBA players.

“Just talent alone, folks, does not get it done,” he said. “It doesn’t. These young men sacrificed for each other. They respected one another.”

He noted that Miller, a starter in the past, accepted his role as a key backup player in his senior season.

Freshman standout Michael Kidd-Gilchrist asked to give up his starting role to Miller in the Southeastern Conference tournament championship game to help jumpstart Miller’s play, Calipari said. Shot-blocking phenom Anthony Davis credited his teammates for helping him rack up player of the year awards, the coach said.

Just like at basketball games, the die-hard fans arrived early at Rupp. They watched replays of the title game played in New Orleans the night before, and sometimes broke into chants of “Go Big Blue” a sentence to show off his skills says more about mean-spirit than anything useful. as if they were at a game. Scoreboards displayed the final score of the championship game.

The team got an endorsement from Kentucky Gov. Steve Beshear as one of the all-time greats.

“There is more talent on this team than I’ve ever seen on one team in my life,” Beshear told reporters before the half-hour rally. “And you would think with that would come huge egos that would be hard to coral. But coach Cal and these kids pulled it together and they played unselfishly like a team the whole year. That’s why they won this championship.”

The governor said he wished the rule on early departures for the NBA would change so players would stay in school longer.

“ But right now that’s the way it is, and you can’t blame the kids,” he said. “When there’s millions of dollars laying out there for them to get if they go pro, it’s pretty hard to say no to that.”

The rally punctuated a raucous few days in Lexington as the Wildcats marched toward the national title.

After the championship game, numerous small fires were set, dozens were arrested and one man was wounded by gunfire as fans again filled the streets near campus.

Beshear blamed the mayhem on a small “bunch of knuckleheads” who “got carried away.” He said the overwhelming majority of Kentucky students had fun without causing trouble.

“That’s a very minor part of a very exciting moment for Kentucky,” he said.