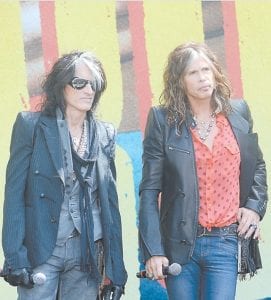 Aerosmith’s Joe Perry, left, and Steven Tyler were photographed earlier this year at a news conference announcing their 2012 Global Warming Tour, which begins on June 16 in Minneapolis. (AP Photo)

Aerosmith has flown with turbulence for most of their 40-year career, but as the group’s summer tour begins this week, things in the band seem to be absolutely blissful.

“We’ve already gone through all our problems,” Steven Tyler said in a recent interview, laughing with Joe Perry.

Aerosmith has definitely had its share of feuds both public and private, most recently in 2009, when Perry lashed out at Tyler after the “American Idol” judge fell off a stage during the band’s concert tour and injured himself, forcing the band off the road. Perry questioned Tyler’s dedication to Aerosmith and even floated the idea of a new lead singer, but they made publicly made up.

“Joe and I were fighting for a while, that’s no secret,” Tyler said. “But whatever demons or realities were going on in the band, it happens with bands that stay together for 40 years and have the success that we have.”

He added that any friction never affected their ability to put on a good show: “We’re up there to play to the audience. It’s never about us.”

“It’s only as good as those two hours onstage,” the guitarist said of the band’s chemistry. “The rest of it, I have no idea how it works. With Aerosmith, we put one foot in front of the other and hope for the best.”

The upcoming “Music From Another Dimension” marks the first time in a decade that Perry and Tyler wrote music together. Tyler says despite the time it took to get back to basics, once they did, it was like a “fine wine.”

“It’s the same bottle man. We just corked it. Everything that was cooking inside and fermenting to that just right year just happened to be now. It was the perfect time,” Tyler said.

Perry said the album was 10 years in the making with riffs he wrote back in 2002, and chord progressions from today. He feels they fit nicely in what he describes as “playing the old songs new and the new songs old” to keep the band lean and mean — part of Perry’s commitment to keep Aerosmith from becoming a nostalgia act.

“There are bands that don’t talk to each other for five years, and then get back together and go out and play their songs and they turn into the best cover band of their own songs,” he said. “That’s fine and well, but for us it will be always changing. We’ve been trying to write this record for 10 years, and we finally did.”

Aerosmith joins several other classic rock acts on the road this summer. The Beach Boys are celebrating their 50th anniversary, and Black Sabbath is reuniting as well. But the latter band had to deal with the acrimonious departure of drummer Bill Ward, and Van Halen is cutting its summer tour unexpectedly short due to mysterious reasons.

For all its past problems, Aerosmith has remained together.

Tyler may have summed it up best: “ With great pressure comes great diamonds.”