After living a Hollywood lie, Tab Hunter died with dignity 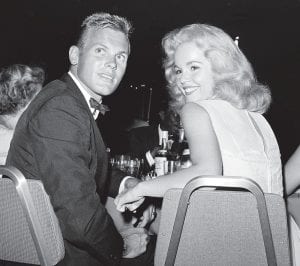 This July 27, 1959 file photo shows actor Tab Hunter, left, with actress Tuesday Weld at a dinner reception in Los Angeles. Hunter, the blond actor and singer who was the heartthrob of millions of teenage girls in the 1950s and received new attention decades later when he revealed that he was gay, died July 8. He was 86. (AP Photo)

Tab Hunter died this month at 86. Blond and blue-eyed with a sweet smile, Hunter fit the 1950s bill for a Hollywood heartthrob. But he had no interest in the girls who swooned over him — or for girls in general. Hunter was one of several closeted gay movie stars leading complicated double lives. Unlike most of the others, however, he eventually chose a life of sexual honesty.

In his 2005 autobiography, made into the documentary “Tab Hunter Confidential,” Hunter describes his wild ride with remarkable objectivity. He rarely seemed to confuse Tab Hunter, the Hollywood product, with Arthur Gelien, the human he was born as. That and perhaps a lifelong attachment to the Roman Catholic Church helped save his sanity.

His mother was a German immigrant who, after divorcing his abusive father, moved Tab and his brother from New York City to California. Hunter’s mesmerizing beauty notwithstanding, he started off on a conventional path. Tab served in the U.S. Coast Guard and worked the counter at an Orange Julius. Always loving horses, he took a menial job at a stable. There he was “discovered.”

Hunter’s first big romantic lead was opposite Linda Darnell in the 1952 film “Island of Desire.” Often cast as a Marine, as an Air Force pilot or in another military role, Hunter did his duty performing steamy kiss scenes with a lineup of Hollywood bombshells.

Other gay or bisexual actors — such as Cary Grant, Anthony Perkins and Rock Hudson — enjoyed highly successful careers. They attended house parties frequented by gay men, parties that were illegal. Hunter was arrested at one, but a seasoned Hollywood lawyer got him out of jail with a warning to protect his heterosexual image.

Like many gay actors, then and even now, Hunter made a point of parading before the cameras in the company of female stars. The others mostly died in the closet. Not Tab Hunter. He refused to burden a woman with a phony marriage. And when humiliation came his way, he faced it straight on.

Gossip columnists of the day referred to gay actors’ sexuality only through hints. Hedda Hopper, for example, wondered out loud why Hunter had remained a bachelor for so long. His reason, she wrote, was that it was impossible to choose from all the beautiful women out there.

Less protective was a scandal sheet called Confidential. In 1955, just as Hunter’s career was taking off, it reported his arrest at a “limp-wristed pajama party.”

Why would a “pretty boy” ignite an inferno of female crushes? Simple: Women are very attracted to men with a feminine side. French actress Catherine Deneuve observed of Gerard Depardieu, an ex-lover known for his lusty acting roles, “There is something very feminine about Gerard, just as there is something very masculine in me.”

The Beatles’ long hair shocked much of ‘60s America as unmanly.

Newsweek in 1964: “Visually, they are a nightmare: tight, dandified, Edwardian/Beatnik suits and great pudding bowls of hair.” The girls, however, went gaga. And it deserves noting that in 1957, Hunter knocked sexually aggressive Elvis out of the No. 1 recording spot with his tender hit “Young Love.”

Blessed with clear-eyed realism and a tamed ego, Hunter publicly evolved into something more like his real self. In John Waters’s campy 1981 comedy, “Polyester,” he makes out with Divine, a 300-pound transvestite.

When Hunter finally did get married, it was to a studio executive named Allan Glaser. They stayed together for 35 years, until Hunter’s death.

“I’m happy to be forgotten,” an elderly but still gorgeous Tab famously said. That’s not going to happen. There was so much more to this pretty boy than met the eye.

Froma Harrop can be reached at fharrop@gmail.com. ©2018 Creators