After long absence, it’s nice to have ‘Lazy Wife’ beans in garden again 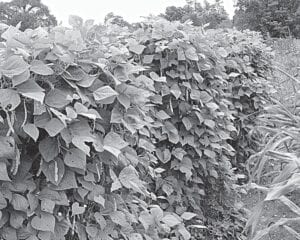 Columnist Ike Adams has had good luck with growing Lazy Wife fall green beans (above) since 2016. The Adams family used to grow the beans regularly on Blair Branch in the 1960’s, but could no longer find the seeds until Ike’s brother Keith saw them in a seed catalog.

If all ended up going as planned, we should already this week have pulled 12 dozen or so ears of Bodacious sweet corn off the stalks and picked a big mess of Lazy Wife fall beans.

Corn is the top priority because the coons have not yet discovered it. They are almost sure to get the ears that are not quite full. I’m convinced that ‘coons can smell sweet corn for several surrounding counties, especially if we’ve already started picking it, and this will be the first time in several years that we’ve started before they did. I have yet to see a raccoon eat green beans but they may do it for spite when we beat them to the top choice corn. The beans are not yet full enough to get a canning and need another week of growth.

In the mid to late 1950s, my dad happened onto Lazy Housewife green bean seeds at Frazier’s Farm Supply in Whitesburg. I believe he first tried them because of the novelty name and because his friend and cousin, Clyde Frazier, the business proprietor, told him they were supposed to grow well when planted in field corn.

Flat land, suitable for cultivation, was in short supply on Blair Branch way back then. It still is, but nobody does any serious farming these days. We had no choice because Dad’s coal miner’s wages were simply inadequate for a growing family. Double cropping beans with the field corn provided cash we really needed. Almost all the corn went to our livestock and a lot of the beans were canned or dried for our own use, but we grew green beans by the pickup truckloads to sell on both the door-to-door and wholesale markets.

Dad was always on the lookout for any kind of white seeded pole bean that would out-perform white seeded cornfield beans or white half runners. I have no idea why he never came across the Babe Beans featured in last week’s column.

Both Missouri Wonder and Kentucky Wonder beans were easy to grow in corn and you could pick a bushel in less than half the time it took to pick half runners and pole beans, but both are brown seeded. Eastern Kentucky natives were reluctant to buy beans that were not white seeded. I have no idea why that still seems to be the case.

People would pay top dollar for any variety of “fall beans”, colored or not, but “fall beans” are very difficult to grow in corn. Dad quickly discovered that Lazy Housewife beans looked and tasted almost exactly like overgrown white fall beans and they did, in fact, thrive in corn. It took a bit longer to pick a bushel of what we had come to call “Lazy Wife fall beans” but they fetched prices that were considerably higher than any other variety he had ever grown. Comparing fall beans to other green beans is sort of like the difference between apples and pears. Both are fruit. Half runners and fall beans are both vegetables but they taste as differently as apples and pears.

Then, in the mid or late 1970s, he discovered that neither Clyde Frazier nor anybody else had Lazy Housewife seeds for sale. The run was over and remained that way until my brother, Keeter (Keith), happened to notice them advertised on the front page of R.H. Shumway’s seed catalogue in the spring of 2016 and we wondered if they might be the same ones Dad had grown for well over a decade about 40 years before. Both the seeds and the pods in that photograph looked like the ones we remembered.

I found the Shumway’s website and ordered a pound of the seeds on the spot. Turned out they were exactly the same beans my brothers and I remember and I have grown them for the last five years. Brother Andy and I discovered that they may do well in field corn but they will ride sweet corn stalks to the ground. I reverted back to growing them on wire trellis “hoops” the same way I’ve been growing other fall bean varieties over the last 35 plus years.

I’ve been saving the seeds for the last few years, but Shumway’s Seed Company still carries them. Order a catalogue by mail from R. H. Shumway’s Co., 334 Stroud Street, Randolph WI 53956 or google them online. I’m sure that I won’t have enough to go around.