After long delay, W’burg couple have adopted daughter at home 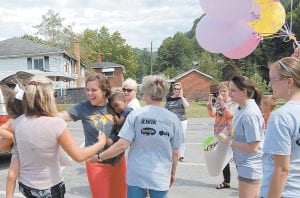 NEW GIRL IN TOWN — Reagan Berry and her two-year-old adopted daughter Kona were greeted by friends Tuesday afternoon at the parking lot of First Baptist Church of Whitesburg. Reagan and Kona arrived in Lexington Monday evening after flying in an airplane from the Democratic Republic of the Congo. (Eagle photo)

A Whitesburg couple were finally able to bring their adopted daughter home this week, more than 17 months after they began the adoption process in the Democratic Republic of the Congo.

Kona is the new daughter of Jonathan and Reagan Berry, who first learned about the girl when she was an eighth-month-old orphan who didn’t have anyone trying to adopt her.

“This feels like the longest journey home,” said Mrs. Berry, whose husband is associate pastor at the First Baptist Church.

Kona is the second child adopted by the Berrys. They had successfully adopted a little boy, Addis, from Ethiopia before and were familiar with the process.

Two weeks after learning of Kona, whose name means “ lady,” the Berrys began the second adoption process. By May 2013, nearly two months after Kona turned 1, the Berrys had legally gained custody of her. 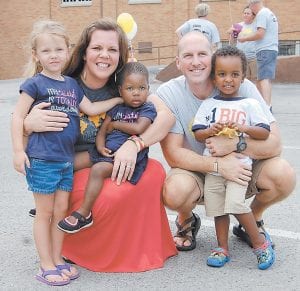 So that Kona could obtain U.S. citizenship, the Berrys went through a U.S. Embassy investigation that took several months to complete. Originally, the Berrys anticipated the girl would be in Letcher County by Christmas 2013 or the beginning of 2014.

On Sept. 25, 2013, however, the Democratic Republic of the Congo suspended exit letters, which was the last step to bringing Kona and nearly 450 other children who have been adopted by U.S. families to America. The letter suspension resulted in a Louisville couple having two children from the Congo die before they could bring them back to the U.S.

Since the Berrys gained custody of Kona, they had been paying $500 a month in foster care fees while waiting for the exit letter to be signed. Mrs. Berry flew to the Congo in March to meet Kona, care for her and celebrate her second birthday with her on March 26. 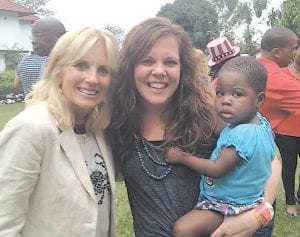 In photo below, Jill Biden, wife of Vice President Joe Biden, posed with Reagan Berry and newly adopted daughter Kona in the Republic of the Congo on July 4.

After being in the Congo for three weeks, Mrs. Berry came back to Whitesburg without Kona. On June 15, she returned to the Congo with her husband by her side. Jonathan Berry stayed two weeks before coming back to Kentucky.

On July 4, the same day Reagan and Kona Berry met Jill Biden, wife of Vice President Joe Biden, the Berrys were told that Kona’s exit letter would be signed July 5.

Although Dr. Biden arrived in the Congo after the Berrys had gotten a humanitarian exit for Kona, Mrs. Berry said Biden is speaking up for these 450 children in meetings she attends.

“(Biden) is very much an advocate of helping us,” said Berry.

Fifteen Congolese children whose paperwork was dated before Sept. 25, 2013 came to the U.S. in May.

Because of medical exceptions, Kona is one of three Congolese children adopted by U.S. families to obtain clearance to leave the Congo since the suspension of the exit letters last fall. A Congolese child came to the U.S. two weeks ago and another child will board an airplane today (Wednesday) headed for the U.S.

“It’s pretty much a miracle that she is home,” said Berry.

Reagan and Kona Berry boarded an airplane in the Congo on July 6 and arrived in Lexington on July 7. After spending the night in the bluegrass, the Berrys arrived in Whitesburg around 4 p.m. July 8.

The Berrys moved to Whitesburg from Louisville when Stella was six weeks old.