After snow, road was the worst it’s ever been 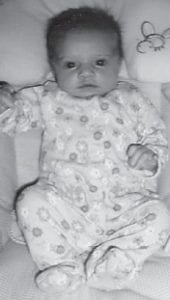 JANUARY BABY — Arabella Carty was born January 7. She is the daughter of Keith and Megan Carty.

Hello everyone, do you still remember me? I hope everyone is doing well. I have been snowed in is the reason I didn’t write my news last week. I couldn’t get off my hill for five days and couldn’t even get to my mailbox.

Our road was the worst it has ever been, even the four-wheel drives couldn’t make it up my hill. No one had any salt or anything to put on it. The stores were all out of it.

I really did appreciate all the folks who called and let me know they missed my news. I think they were joking.

I attended the funeral of our nephew Kellis “Bud” Hatton. It was good seeing Bobbie Jean Collins and Mabel Jo Buttrey there and getting to talk with them. Thank you, Bobbie Jean, for all the nice things you said about my sons. I think they are special boys! I was also glad to see my buddy Elzie Ray Hatton and his sister “LuLu” there. Thanks for the kraut, Elzie Ray. It was very good!

I sure enjoyed a call from my friend Ada (Miller) King. We always find plenty to talk about, the good old days at Marlowe.

I finally got to go back up to the Ermine Center. I think everyone was there after being snowed in. I was glad to see everyone.

Boyd Hatton called to ask about the Veterans Center in Hazard. I told him I would certainly recommend it to anyone. The nurses are the best and they treat the patients so good.

Kevin Day had minor surgery and went home the same day and is doing well and back on the radio again. I kept his son Rocky while he was there and we had a good time and ate lots of pizza!

I really missed going to church on account of the snow. I was sure glad to get back. I told everyone I felt like the groundhog just coming out of his hole and didn’t even see my shadow!

My grandson Chris Hatton and family spent last weekend at the lake and had a real good time.

It was nice getting a call from Tommy Stansberry the other day. He had been in California and was telling me about seeing the Golden Gate Bridge and lots of other things. I told him he should be ashamed of himself, having all that fun while we were snowbound here. I don’t think he was one bit ashamed and just enjoyed it. Shame, shame!

Dorthy Tackett said she and her sisters Pearl Noble and Linda Hall and Charlene Mason all visited Madonna Pennington the other day and said she was looking real good. Grace Short, Madonna’s mother, was there also. They said she looked so pretty! She always does and is a very sweet lady.

Hello Riley Caudill, who says he always reads my news and said Elzie Ray Hatton was related to him.

I enjoyed visiting with Sandra Cook and Angie Mullins at the hospital on Friday while Rich Mullins was having some minor surgery. He was doing fine and they let him go home.

Sandra and I went to Pine Mountain Grill and had lunch to celebrate her birthday. I saw my neighbor Robyn Sexton there and she told me her grandfather Lenville Sexton was really sick. Remember him in prayer. I’ve know him as long as I can remember. I’ve always liked him.

My cousin Leonard Howard of Dayton, Ohio, died last Wednesday. He was the son of the late Polly and Less Howard. His sister Ida Hatton and husband Roger were on their way to his funeral. I hope they didn’t run into a lot of bad weather.

I’m glad to report Bro. Robbie Conn has had a heart transplant after being so sick for so long. He spent 52 days in intensive care in UK Hospital in Lexington. They say he is doing well and the doctor says everything went well. I’m sure the family is overjoyed. A lot of prayers have gone up for him.

Iva (Absher) Cheatham of Stanford called me to see if I was sick. I told her, no, I was snowed in and that was the reason I hadn’t written my news. Her son Jack Absher is still very sick and needs prayer.

I talked with my son Rob in Owensboro. He said they had two inches of snow. I told him we were expecting that and hope not to get it.

The Diabetes Support Group will meet at 6 p.m., Feb. 22, in the second-floor atrium conference room at Pikeville Medical Center. Guest speak Mavis Lowe, R.N., will present part one of a three-part series on food. All meetings are free. For more information, call (606) 218-3513.

There will be a Jenkins Independent Schools comprehensive planning meeting Thursday, Feb. 11, at 6 p.m. in the board room at Central Office. The meeting is open to the public.