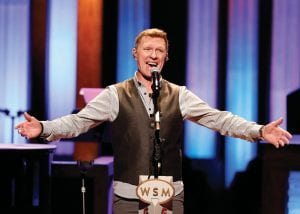 Three years after country singer Craig Morgan lost his 19-year-old son in a drowning accident, he wrote a song about his grief, pain and his faith, called “The Father, My Son, and the Holy Ghost.” He performed it on the Grand Ole Opry and sent a recorded version to his friend and fellow Opry member Blake Shelton. Shelton started an impromptu social media campaign to promote the song, which caused a widespread response of fans reaching out to Morgan. (Invision/AP)

The last evening that country singer Craig Morgan spent with his 19-year-old son, Jerry, was during one of Morgan’s performances at Grand Ole Opry three years ago.

“The last pictures I have of us together is on that stage,” Morgan, 55, said backstage at the Opry House. “So this is a very special place. It was anyway before, but now it has additional meaning, knowing this is where we hung out together.”

His son, Jerry, who was home visiting from college, died in a drowning accident on Kentucky Lake in July 2016. Three years later, Morgan, who wasn’t signed to a label at the time, came back to the Opry this past summer to sing a song he wrote about his son called “The Father, My Son, and The Holy Ghost.”

He sang about crying until he passed out, praying until he thought he couldn’t anymore and realizing that one day he’ll be reunited with his son. Morgan stepped off stage, physically and emotionally exhausted from the performance, and told his friend Ricky Skaggs, the bluegrass singer and Country Hall of Famer, that he didn’t know if he could sing that song again.

“Ricky told me, ‘You have to sing this song for the rest of your life,’” Morgan recalled.

Morgan’s first song in three years has now been championed by his peers at the Opry and the larger musical community. His friend and fellow Opry member, Blake Shelton, spent several days tweeting about the song and urging his 20 million Twitter followers to download the song from iTunes and push it up the charts.

“I didn’t even know what was happening,” said Morgan. “I was in Alaska and had no idea what was going on until I started getting texts from everyone.”

Morgan, an Army veteran whose had hits like “That’s What I Love About Sunday” and “Redneck Yacht Club,” said that since releasing the song, he’s been reading the hundreds of messages sent daily to him by fans who identify with the grief and pain, but also the hope that he described in the song.

“I felt a push. I felt shoved to do this, and not by people. For me, it was God,” Morgan said.

The song lyrics are also a reference to Morgan’s conversion to Roman Catholicism, which his family, including Jerry, had been going through at the time of his death. That faith and religious education is something he leaned on heavily over the past three years.

“And I know I’ll see my son again because I know his faith,” Morgan said.

Morgan, who announced in September a new record deal with Broken Bow Records, said that the song has given him a purpose to help comfort others, especially people who have lost a child, and that was always God’s plan.

“ You know, the thing is, I would much rather none of this stuff happen and him to be able to be here,” Morgan said. “But that’s not the way it is. And now he’s in a place where what’s happening has a different meaning.”