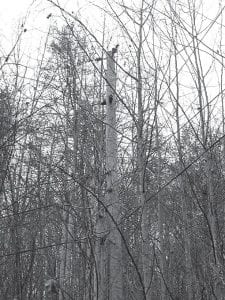 This utility pole, which holds Kentucky Power Co. electrical lines at its top, is hard to distinguish from trees the power company has permitted to grow up around it during the past few years. Such scenes are common in Letcher County and help explain why a storm that left between four and eight inches of snow resulted in power losses affecting more than 7,100 county homes.

The aftermath of the December 18 snowstorm that left more than 7,100 Letcher County households without electricity has us asking a number of questions.

For instance, if an accumulation of snow ranging from four inches to eight inches — depending on where you live — was enough to cut power to nearly half the homes here, how many Letcher County residents would have been without electricity if we got the 20 to 30 inches of snow that fell on much of West Virginia the same evening, or even the foot of snow neighboring Wise County, Va., was left to deal with?

What if the storm hit instead in late January, when temperatures here often dip below zero? Would our county still have been lucky enough to escape without any storm-related deaths like we were this time?

Still, the biggest question on our minds is two-part: Why has Kentucky Power Company abandoned its cycle of trimming trees beneath and around its power lines every four to five years in the mountains, and why has the Kentucky Public Service Commission remained silent while the power company’s parent company, AEP, has adopted a maintenance-be-damned policy that puts its shareholders above the health and safety of its eastern Kentucky customers?

Like most reasonable people, we understand that when a heavy, wet snow hits a largely rural and wooded area like the one in which we live, trees are going to fall and homes are going to be left without electrical service. However, it is difficult to believe that some Letcher County residents would have been forced to live without power until late Monday night (10 days after the storm) if the Public Service Commission had seen to it that Kentucky Power carried through with the many promises of better maintenance and system upgrades company officials made after an investigation initiated by a Letcher County Grand Jury in 1996.

Because of Kentucky Power’s failure to live up to the agreement it made with the PSC 13 years ago, Letcher Commonwealth’s Attorney Edison G. Banks II has announced he will call on the grand jury to open another investigation and subpoena power company officials back to court to explain why they have permitted lines and other equipment to return the same sorry state of disrepair as before.

According to a story appearing on the front page of this week’s edition, Banks will also offer citizens affected by the latest power outage the opportunity to have their say before the grand jury by filling out a form that will be available at public libraries, senior citizens centers, the sheriff’s department, the county judge/ executive’s office, all city halls and all city police and fire depar tments, and all volunteer fire departments. We encourage all citizens affected by the company’s poor service to pick up one of the forms and tell their story to the grand jury.

Meanwhile, Kentucky Power announced this week that it has filed a petition with the Public Service Commission seeking an extra $123.6 million each year in “rate relief.” If the PSC approves the 34.95 percent rate hike, the monthly bill for a residential customer using 1,427 kilowatt hours of electricity per month will increase from $114.57 to $154.62.

If the high rate of unemployment caused by the continuing global recession isn’t enough to persuade the Public Service Commission to deny the rate increase, the PSC should at the very least delay taking any action on the request until after the Letcher County Grand Jury determines what, if any, action it will take on complaints being filed against the power company. In the end, a rate increase of any size should be tied to the requirement that Kentucky Power begins once again to property maintain its lines and other equipment.

While each Letcher County resident affected by the recent power outage has every right to be angry at the men and women who make the decisions on beh alf of AEP and K entucky Power, he or she sho uld be equally appreciative of the nine local power company workers and one four-man contract crew who continue to do the bes t they can to keep our lights on under circumstances that can be very trying.

All of us should also thank the large number of reinforcements, including 120 employees of Entergy Arkansas, who arrived in Letcher County four days after the storm to help return life to normal.