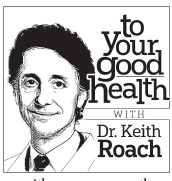 DEAR DR. ROACH: I am 88 years old and in good health except for a small stroke I had a year ago with no lingering deficiencies. I have had an enlarged prostate for most of my adult life, but a biopsy showed no cancer. I have had problems with urgency. I tried a medication, doxazosin, with poor results, if any. My last visit, they recommended nothing more than medication. Is removing the prostate not advisable because of my age? What’s the reason they don’t remove it completely? — C.W.S.

ANSWER: Symptoms of an enlarged prostate in men without cancer are common, and the condition is called benign prostatic hypertrophy. BPH can be treated with either medication or surgery. For most men, medication works well. Saw palmetto is used by many men, but welldone trials have shown it to be no better than placebo. Medications like doxazosin, including tamsulosin (Flomax), often are the first ones tried and usually work pretty well, but finasteride (Proscar) and dutasteride (Avodart) are effective as well. A combination is probably most effective of all. However, even that doesn’t work for some men.

The most common prostate surgery nowadays is a TURP (transurethral resection of the prostate). This is far less invasive and has fewer risks than the old open method, and generally has good results. However, as with any surgery, there is never a guarantee of success, and I have seen several men get worse after TURP, even though most get better.

Age in and of itself does not necessarily preclude surgery. However, a history of stroke does make surgery a bit more risky. I don’t recommend surgery lightly, and since you haven’t reported giving finasteride or dutasteride a chance, either alone or in combination, I would recommend a good trial of those before contemplating surgery.

The booklet on prostate enlargement and prostate cancer deals with these common male problems in detail. Readers can order a copy by writing: Dr. Roach — No. 1001W, Box 536475, Orlando, FL 32853- 6475. Enclose a check or money order (no cash) for $4.75 with the recipient’s printed name and address. Please allow four weeks for delivery.

Dr. Roach regrets that he is unable to answer individual letters, but will incorporate them in the column whenever possible. Readers may email questions to ToYourGood- Health@med.cornell.edu.