Age of Bush ends with flight to Texas 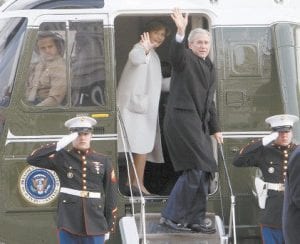 Former President George W. Bush and Laura Bush waved as they boarded a Marine helicopter at the Capitol in Washington after Barack Obama was sworn in as the 44th president of the United States. (AP Photo)

With one last handshake with President Barack Obama, George W. Bush boarded a helicopter on Tuesday at the Capitol and began his post-presidential life, closing a two-term administration marked by war, recession and the biggest terrorist attack on U.S. soil.

Vice President Joe Biden gave Bush a brief salute as the chopper left the Capitol grounds and headed to Andrews Air Force Base, flying over the throngs of supporters who came to Washington for the historic inauguration of the 44th president.

The unpopular incumbent and Obama, who has ascended to rockstar status even as he faces daunting and international challenges, stood with their wives on the Capitol steps smiling and laughing. If there were any hard feelings between the incoming Democrat and outgoing Republican, they weren’t apparent in the Bush send-off at the base of the helicopter. The two men hugged and clasped hands one final time, sealing the transfer of power.

Bush actually began the first few minutes as an ex-president listening to a musical prelude at the swearing-in ceremony. Obama had not yet taken the oath of office, but while the musicians played, he became president at 12 noon EST, according to the Constitution.

Some in the crowd, weary of Bush’s eight years in office, booed the president when the large viewing screens near the World War II Memorial flashed an image of the exiting president arriving at the swearing-in. Moments later, rounds of cheers welled up as the same screens showed the incoming first lady, Michelle Obama, and her two daughters, Sasha and Malia.

Unfazed by his unpopularity, Bush smiled and waved throughout the day’s activities. He blew a kiss out the window of his limousine as he left the White House with Obama.

After the inauguration ceremony, some in the crowd waved at the aircraft in the sky. Others, however, cheered when they heard a television broadcaster announce, “George Bush is no longer president of the United States.” Still others in the crowd, broke into chants of “Na-na-na-nah, hey, hey, hey, goodbye.”

Keeping with a White House ritual, Bush left a note for Obama in his desk in the Oval Office, wishing him well as he takes the reins of power.

“I won’t provide any details, but the theme is similar to what he’s said since election night about the fabulous new chapter Presidentelect Obama is about to start, and that he wishes him the very best,” outgoing White House press secretary Dana Perino said.

She said the two-term Republican incumbent wrote the message to his Democratic successor on Monday and left it in the top drawer of his desk, which was crafted from timbers from the H.M.S. Resolute and given to the U.S. by Great Britain in 1879.

Bush was in the office before 7 a.m. EST. He spoke on the phone with Secretary of State Condoleezza Rice, National Security Adviser Stephen Hadley, former White House chief of staff Andy Card and T.D. Jakes, the pastor of a megachurch in Dallas who will preach at a private church service that Obama is attending before the Inauguration. Bush took one last stroll around the south grounds of the White House.

Perino said the president’s mood was upbeat. “He’s the president of the United States, the way he always is. He hasn’t changed. He gave me a big kiss on the forehead,” she said.

At Andrews, Bush quickly disappeared into a hangar for a private farewell speech to scores of former White House aides and supporters. Among them were former political adviser Karl Rove, former Attorney General Alberto Gonzales and former White House counsel Harriet Miers. Bush emerged about a half-hour later and boarded the familiar blue-and-white presidential aircraft, which was called Special Air Mission 28000 instead of Air Force One since he no longer was president.

The plane took off about 2 p.m. EST for Midland, Texas, where thousands of well-wishers are expected to greet Bush and his family at Centennial Plaza. It’s the same place that Bush stopped on his way to the nation’s capital for his own inauguration in 2001. While Bush was born in New Haven, Conn., he spent his childhood in Midland. He returned there as an adult in the 1970s and met the future first lady.

After the Midland rally, the Bushes are flying to Waco, Texas, on their way to their 1,600-acre ranch in nearby Crawford.