Agency to provide mental health and drug abuse help at jail with $900,000 grant 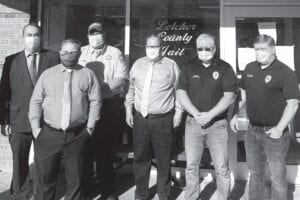 Mountain Comprehensive Care Centers Inc. will use a $900,000 grant from the U.S. Department of Justice to provide substance abuse and mental health counseling and therapy in the Letcher County Jail.

The multi-year grant comes through the Bureau of Justice Assistance, and will allow the mental health agency to work with about 30 inmates during the first year, and more than 200 over the course of the grant, said Adam Maggard, program director southern Kentucky for MCCC.

Jailer Bert Slone said the grant is the largest to benefit the jail since he took office two years ago. He said he had been looking for help, but inmates don’t get Medicaid, and there was no money available to pay.

“I had talked to several different people about helping in the jail, but it all came down to money,” Slone said.

He said Maggard found the grant and MCCC applied using statistics provided by the jail. The grant award was announced last week.

Letcher District Judge Kevin Mullins said Kenton County was the first in the state to offer medical treatment for addition. That program is a different from the one MCCC will administer.

“There’s some things about this program that appear to be a lot better because it is not providing Suboxone and Subutex,” Mullins said.

Instead, the local program will use a drug called naltrexone, also known by the brand name Vivitrol, a time-release opiod antagonist that blocks the desire for opioids. It can also be used in conjunction with counseling to reduce the desire for alcohol.

Mullins, whose court deals with misdemeanors that are often related to substance abuse, said Maggard worked nonstop to get the grant.

“This is an incredible opportunity to offer behavioral health and substance abuse treatment at no cost the county, or to inmates who otherwise would be ineligible for release from custody,” Mullins said.

Success will be measured by the rate of recidivism by inmates who are treated. Recidivism is defined as the number of inmates who return to jail within less than a year of their release. Currently, the average rate for jails such as the Letcher County Jail is 37 percent. The grant looks to lower that to 32 percent.

The program will focus primarily on inmates whose drug of choice is either methamphetamine or opioids, and who are expected to spend at least a year in jail. Completing the program successfully may allow them to be released earlier.

The Letcher County Jail is chronically overcrowded with the number of inmates generally more than double the rated capacity when the jail was built. Slone estimated at least 85 percent of the inmates at any given time have some sort of substance use disorder.