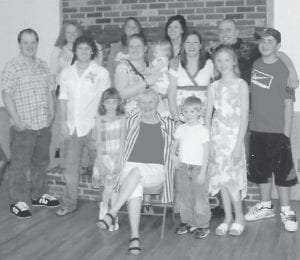 SURPRISE! — Aileen Collins of Taylor, Mich., formerly of Letcher County, was the guest of honor at a surprise party celebrating her 80th birthday recently. She is pictured with some of her grandchildren and great-grandchildren.

Aileen Collins of Taylor, Mich., celebrated her 80th birthday April 17. She was the guest of honor at a surprise birthday party planned by her daughters.

Among those in attendance were four of her seven children, Louise Moore, Rita Neblett, Sharon Smith, and Robert Riddle, and their spouses. Also at the party were longtime friends Carl and Essie Mullins, Brian and Pauline Osborne, Loretta Brekke, Dora Sammons, Oma Moore, and Terri Adams Balint, and many of her 15 grandchildren and 14 great- grandchildren.

Mrs. Collins was born at Hot Spot to Charlie Collins and Christina Cornett Collins Ison. She has a brother, Emery Collins, who lives in Waynesboro, Tenn., and several half-brothers and half-sisters.

She cared for her mother until her death and helps care for a 94-year-old friend who is homebound. She at- tends Woodhaven Worship Center, and reads The Mountain Eagle and Kentucky Explorer as a way of keeping touch with the place she still calls “home.” 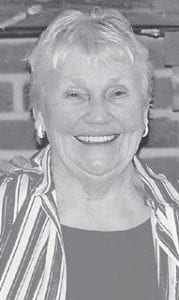 At the conclusion of her birthday party, she thanked all who were there and said, “Let’s do it again next year!”