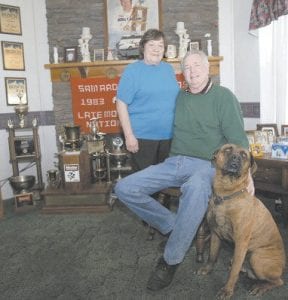 Sam Ard and his wife Jo posed for a family photo with their dog “Putt Putt” at home in Pamplico, S.C., in January 2007. Kyle Busch has donated $100,000 to help Sam Ard with his crumbling finances and medical bills. (AP Photo)

Sam Ard was unsettled late Saturday night, unable to sleep as he peppered his wife about things he couldn’t remember.

Were his parents still alive when he married Jo nearly 50 years ago? Were they doing a good job raising their children?

“He asked me ‘What if I go back racing?’ ” Jo Ard said Monday. “I said ‘If you go back racing, I’m going to hand you divorce papers. Nobody is going to let you go racing.’ ”

He’s 69 years old and suffering from both Alzheimer’s and Parkinson’s diseases. He’s not permitted to drive anywhere anymore, and no one is exactly sure how much Ard understands about the latest push to help his crumbling finances and mounting medical bills.

Kevin Harvick, a champion of Ard’s plight, donated a 2007 Chevrolet van last month to Ard’s family that solved the transportation woes that plagued the couple since Jo’s car died five months ago. Then the NASCAR Foundation and Motor Racing Outreach teamed for an online auction to benefit the Sam Ard Fund.

The largest gesture, though, came Saturday afternoon when Kyle Busch committed $100,000 to Ard moments after winning the Nationwide Series race. The win at Texas Motor Speedway tied Ard’s mark of 10 series victories in a season.

“Sam Ard is one of the pioneers of this (series), and to be tied with him at 10 wins is something that’s pretty spectacular and really, really special to me,” Busch said. “I’m going to try to help him out and see what I can do. It’s not much, but it’s something that can try to help.”

But to the Ard’s, the gesture was enormous.

Ard didn’t have a particularly long NASCAR career, but his three seasons netted him two championships in the second-tier series now sponsored by Nationwide. He never got rich from racing, and collected roughly 25 percent of the $378,765 he made in winnings before suffering severe head trauma in a 1984 accident.

Unable to secure a consistent income after the accident, the Ards blew through their children’s college funds to cover everyday expenses. Unlike every other major professional league, NASCAR does not provide a pension to its participants and has not been on the hook for Ard or any other former driver facing financial difficulties.

The NASCAR community has occasionally stepped in to help, and a 2006 plea to their peers by Harvick and Dale Earnhardt Jr. led to a significant donation to Ard’s care fund. That gesture and Ard’s fight were the centerpiece of a 2007 Associated Press examination of NASCAR’s indifference toward financially supporting its veterans.

Jo used the money to pay off the mortgage on their doublewide trailer in Pamplico, S.C., repay debts and collect the two championship rings that Ard was forced to turn over as collateral on a loan. Then Ard was seriously injured in an April, 2007, accident on an all-terrain vehicle that gobbled up the last of the money.

When the balance in the fund dipped below $200 earlier this year, Jo Ard had to close the account before Wachovia’s $35 monthly maintenance fee gobbled what remained. Social Security, Ard’s veterans benefits and the little bit Jo brings home from cleaning houses and taking care of some hunting dogs is the only money currently coming in.

So when Busch pledged his assistance, Jo Ard said the 23- year-old racer had no idea the magnitude of his gesture. She said she’ll use a chunk of the money to make their bathroom handicap accessible so Ard can use it alone.

“Kyle doesn’t know what he’s done. He really, truly does not know what he’s done to take the load and the pressure off of me,” Jo Ard told The AP by telephone Monday. “We can do the bathroom. I can maybe get someone to come to the house and help me if I need them, because we’re here day in and day out because Sammy can’t be left alone. He falls. He can’t drive. He’ll tell you he feels fine, but every day is different.”

Ard watched Saturday’s race at Texas with his grandson, aware that Busch was chasing his 1983 mark for wins in a season. Jo was with her sister for a rare dinner out when son, Robert, called her.

“Mama, are you sitting down?” Robert told her. “Well, Kyle tied Daddy’s record, and I had someone call me and tell me that Kyle is going to give Daddy $100,000.”

Hours later, when a fidgety Ard kept Jo up talking until 2:30 a.m., she sensed he understood Busch’s contribution.

“I guess his mind was just thinking because he said ‘I’ve been praying that something could come along that we could pay the bills and you can get a car,’ ” Jo said. “So he’s aware of what’s going. I asked him what he wanted to do with Kyle’s money, and he said for me to do whatever I wanted. He just wanted a couple hundred dollars to put in his wallet.”

Many view the Ard’s predicament as NASCAR turning a blind eye toward its pioneers with its refusal to pay a pension plan to its athletes. NASCAR’s direct employees are eligible for both a pension and retirement fund, but drivers and crew members are viewed as “independent contractors” and aren’t covered for any sort of assistance.

The Ards have gone through stages where they’ve been angry at NASCAR and its antiquated policies. But Jo Ard isn’t bitter right now, instead so grateful to the community help they’ve received. Although the sanctioning body does not specifically contribute anything, individual highranking officials have made personal financial donations for his care.

“There’s been some good boys,” Jo said, “and we’re just so thankful for their help.”