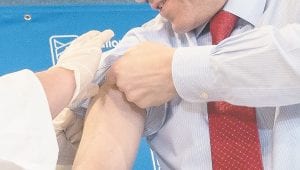 A flu shot was given early last fall at the National Press Club in Washington. The miserable flu season is winding down but not quite over yet, even as the government picked what it hoped would be a better vaccine recipe for next fall and winter. (AP Photo)

The miserable flu season is winding down but not quite over yet, even as the government picked what it hoped would be a better vaccine recipe for next fall and winter.

If it seems early to worry about the next flu season, well, producing 140 million doses of vaccine requires starting months in advance.

It’s a process that’s part science, as researchers track what flu strains are spreading in different parts of the world to predict what may come here. And it’s part luck, as this year showed when a surprise new version of an aggressive flu strain — one that arose too late to be added to the vaccine — swamped the country.

Advisers to the Food and Drug Administration have urged the government to explore ways to improve how each year’s flu vaccine is created.

“It’s hard for me to believe that we cannot do better,” said Dr. Pedro Piedra of Baylor College of Medicine in Houston.

Meanwhile, the panel recommended that next winter’s flu vaccine be sure to include the new H3N2 strain, as influenza cases around the world suggest it’s still spreading.

The flu season peaked in January and is steadily declining but there’s still a lot of illness around the country, Dr. Lisa Grohskopf of the Centers for Disease Control and Prevention said last week.

The vast majority was caused by a nasty version of Type A flu, the so-called H3N2 branch of the viral family that tends to trigger more pneumonia and other complications than other forms of influenza and is particularly risky to seniors. Indeed, this winter’s flurelated hospitalizations of people 65 and older were at their highest since the government began tracking that in 2005, Grohskopf said. And while it’s too soon to know the death toll, the CDC does closely track flurelated child deaths, now at 92, close to the yearly average of 100.

Part of the problem: This year’s vaccine was only about 18 percent effective against that H3N2 strain, Grohskopf said.

Why? Flu viruses constantly mutate, and the vaccine is changed yearly to keep up based on what scientists see circulating in other countries. Each year it contains protection against two Type A strains — a version of H3N2 and a version of H1N1 flu, such as the swine flu that was so common a few years ago — and, depending on the brand, protection against either one or two versions of milder Type B flu.

Last February, FDA’s advisers recommended the recipe for this year’s vaccine. Then in March, the CDC noticed a few cases of a slightly different H3N2 strain starting to circulate, a strain just different enough that the vaccine wouldn’t provide protection against it — but no one knew if enough would spread for that to matter.

The so-called drifted strain slowly grew more common over the summer. By late September, it accounted for half the strains in a global count, but U.S. vaccine production was already finished.

It’s the fourth time in 20 years there’s been an important mismatch with the vaccine. Last week, FDA’s advisers asked how to better guard against that happening again.

“Were there any signs we could have picked up that it was drifting?” asked Dr. Patrick Moore of the University of Pittsburgh.

Not in time to change vaccine production, responded CDC acting deputy flu director Jacqueline Katz. A few flu strains pop up every year that don’t react well to the flu vaccine, but most fade away and there’s no good way to predict which may be a real threat until they spread more widely, she explained.

Since H3N2 is the harshest type, why not postpone a decision on which strain to include in the vaccine while manufacturers get started brewing the rest? That would take a lot of coordination to work, Katz cautioned.