New airport could be ready to use by 2025 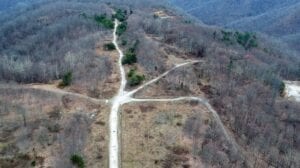 THE NEW LETCHER COUNTY AIRPORT would be built here on an old Redfox Coal strip mine known as Sunset. This aerial photo is looking South along the location of the proposed runway.

Fifty years ago, pilots caught in a flash storm or running low on fuel could land their plane at Colson, wait out the weather and top off their tank before getting back in the air.

By 2025, they might be able to do that again, one ridge over near Isom. An airport planner hired by the Letcher County Airport Board said Monday that preliminary engineering for the new field will likely begin in 2022, with bidding and construction starting in 2023.

The Whitesburg Municipal Airport was only a few years old 50 years ago, a narrow, 2,500-foot strip of asphalt that ended in a steep drop. It would raise the hair on a pilot’s head, but it was a welcome sight when the ceiling lowered and snow blew in.

The strip is still there, still marked as Runway 17 for planes landing from the north and Runway 35 for those coming in from the south. There are no white Xs signifying a closed airport, but the trees have grown back up to the edge of the pavement, too close for an airplane’s wings to pass. 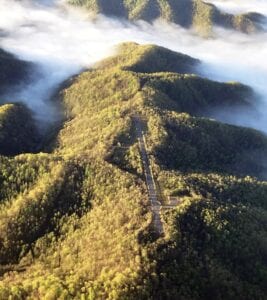 OUT OF SERVICE – This aerial view taken April 22, 2019, by George Kalbfleisch looking south at the remains of Whitesburg Airport appears on the website “Abandoned and Little Known Airfields: Eastern Kentucky.”

The new airport will be one ridge to the west, with a similar north-south orientation but nearly twice as long. And around it, rather than a single hanger and tiny terminal, there are nearly 800 acres to be used for warehouses and businesses.

Joe DePriest, chairman of the Letcher County Airport Board, has been working on that vision for 15 years, and he has heard all of the arguments. “We need other things here,” or “What are we going to do with an airport?” or “That’s just a waste of money.”

“A lot of people say that,” DePriest said this week. “But they also don’t understand that you can’t take $20 million (in airport funding) and use it to build water lines.”

The money for the airports comes from the Federal Aviation Administration, and it can and will be spent for nothing else, he said.

“They’re going to spend their money, whether it’s here or in Dalton, Georgia, or Timbuktu,” he said.

Paul Steely, a former commissioner of the Kentucky Department of Aviation who now works for PDC Consultants LLC of Franklin, Tenn., said at a meeting of the airport board on Monday that the Federal Aviation Administration provides the money for airports, and it will only do one at a time in a state. Right now, that one is in Gallatin County, and it’s on schedule to be completed next year. Then it’s Letcher County’s turn, Steely said.

“We’re still finishing the environmental assessment. That will be finished this fall, probably in October,” Steely said. “The FAA will probably make us have a public hearing sometime between November and January.”

In December, the FAA, through the Kentucky Department of Aviation, spent $615,000 of that money here to purchase about 600 acres of property around a 75-acre tract that was donated to the City of Whitesburg decades ago to build a new airport to replace the old one at Colson. The board has options on more property around that, and the Kentucky River Area Development District is applying for more than $400,000 in Department of Agriculture funding to buy that. Once the purchase is completed, board member Randall Caudill said, the board will control all of the property on the mountaintop from 1,700 feet up. That includes mineral rights that could cause a headache later.

“That will let us control that coal seam,” he said.

The 75 acres might have been enough to build a new 2,500-foot runway, but it was nowhere near enough for a modern airport planned now. It certainly wouldn’t accommodate an expansion to 5,000 feet, which is in the airport board’s dream plan.

But building even a larger airport than was once thought possible won’t take all of the 600 acres the board now owns. DePriest said the board members have other plans for that.

“There will be some hangars, and I know Randall has always been big on having some acreage for industry,” DePriest said.

While the board spent years trying to obtain the acreage, which is over unmined coal reserves, it also considered having a coal company strip mine the property in order to create a longer space for a runway and use the coal mining to help finance the operation. DePriest said with the decline in the coal industry, he never expects that to happen, and, “We’re sure not dependent on that.

“One theory is we could do that airport without ever touching a block of coal, and there’s another theory that we could run into some, but it would be such a small amount that it would be incidental to the construction,” DePriest said.

The property has mostly been surface mined already.

He said his understanding now is that the FAA will pay for the excavation work.

The government has already put nearly $1 million into the project, and DePriest said he doesn’t think it will just abandon the plan after spending that much. Still, with just $1 million invested, the total engineering and construction cost is estimated at $18 million, about 7 percent of the total cost of all the airport projects in the state.

According to the Kentucky Department of Transportation’s Statewide Aviation System Plan, the airport here would be within a 30-minute drive of more than 29,000 people, and would dovetail with the economic development plan.

There is very little data about how much new airports affect the local economy, or how important they are to creating new jobs, but according to a 2009 study by George Washington University, people in high-tech industries traveled by air about 60 percent more than other people, and for established airports, doubling the number of flights per year at a small airport will increase the average per capita income of the community by about 4 percent.