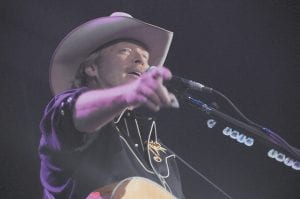 The annual Hillbilly Days celebration in Pikeville got a boost this year when country music superstar Alan Jackson headlined the festival’s official concert at the Eastern Kentucky Expo Center on Saturday night. Jackson played to a sold-out crowd of nearly 7,000 fans who heard many of his biggest hits including “Chatahoochee”, “Mercury Blues”, and “Gone Country” in the 75-minute concert.