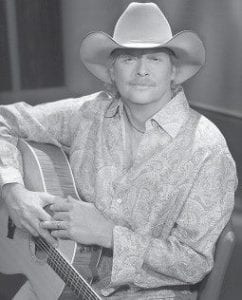 Alan Jackson presses a plastic jug to his lips and takes a big swig. “I live about 10 minutes from here. This is all right. I’ll be home in time to watch the news I reckon.”

Jackson, who once worked in an auto repair shop and still likes to get his hands greasy now and then, is talking to a small audience watching him tape a Country Music Television show, but he might as well be jawing with his buddies over the engine of an old Chevy.

He comes across as downhome as pulled pork, even though many of his songs have a serious message under their folksy veneer.

He returns to traditional country on his new album, “Good Time,” after a gospel disc and the Alison Krauss-produced “Like Red on a Rose.”

The gospel set, “Precious Memories,” was meant as a Christmas gift for his mother and became an unexpected sales hit. The project with Krauss was conceived as a bluegrass record but ended up a collection of love songs that felt more adult contemporary than country. While it drew critical praise, it remains his only album besides a holiday record to sell fewer than 1 million copies.

“That’s what I said before we made it. I said it will get good reviews or win a Grammy, but I don’t think fans will get it,” he said of the record, which was nominated for a Grammy in 2006. “But what the fans heard, they loved. I think they didn’t get the opportunity to hear it because radio didn’t embrace it.”

That’s new territory for Jackson, a hitmaker since his 1989 debut with 31 No. 1 singles. And you get the feeling with “Good Time” that he’s out to shake things up. He wrote all 17 tracks by himself – a lot of songs for a country CD and a bold move to write all of them alone, even for a superstar – and he reunited with his longtime producer Keith Stegall.

His label, Arista Nashville, wanted a more traditional 12 cuts on the record and only paid for that many, but Jackson felt strongly about the rest and included them at his own expense.

“They just seemed to fit together,” he explained.

The first single is a loping tune with fiddle and steel guitar called “Small Town Southern Man” inspired by memories of his late father in Newnan, Ga. It was No. 4 on Billboard and could become his first No. 1 since 2004’s “Remember When.”

As a songwriter, Jackson taps emotions that resonate with everyone at one time or another, said Joe Galante, chairman of his label group, Sony BMG Nashville.

“And his humility makes it even more appealing because he doesn’t come running through the door saying, ‘I just wrote 22 songs and they’re all great.’ He says, ‘I wrote 22 songs and I hope there’s a couple there that you like,”‘ Galante added.

At a time when many country acts look and sound like rock stars, Jackson evokes the image of a 1940s honky-tonk singer. He wears a cowboy hat and beat-up jeans and identifies with men like Hank Williams Sr. and Merle Haggard who either lived that tradition directly or cut their path in its shadow.

“Now, with a lot of new artists like myself, I think the sound of country music has kind of changed a little bit and he’s always that consistent guy who delivers consistent traditional country songs,” said rising country star Jason Aldean, who cites Jackson as one of his influences. “He’s also one of those guys you can tell has lived a lot of the stuff he writes about. It comes through not only when he’s writing but when he’s singing.”

Despite his biggest hit being a rumination on the 9/11 terrorist attacks, “Where Were You (When the World Stopped Turning),” Jackson says he tries to avoid songs that are political or preachy.

“I came along singing in bars, and we sang bar songs and drinking songs and sad cheating songs. That’s what I loved and that’s still my favorite type of music. So most of the time that’s where it ends up.”

Still, at his best he distills complex, sometimes thorny issues into simple stories. In “Little Man” he tells of big box retailers and chain stores squeezing out small businesses; in “Gone Country” of carpetbaggers cashing in on the country boom. “Drive” deals with the bond between father and child and how it spans generations.

On the new record, he has a song called “I Still Like Bologna” that expresses a middleaged man’s frustration with new technology, even though he knows it’s for the best.

“But I still like bologna on white bread now and then. And the sound of the whippoorwill down a country road,” he sings.

It’s an honest sentiment from someone who turns 50 this year. “Every now and then something will come up while we’re watching television or a DVD and I’ll tell my kids that when I grew up there were only three channels and only one telephone in the house. They can’t even understand that at all.”

Famously low-key, the Newnan, Ga., native is married to his high school sweetheart and they have three daughters aged 10, 14 and 17.

While he’s avoided the personal drama that’s dogged other country stars, he had a dustup last year when his wife, Denise, published a memoir that revealed he’d been unfaithful earlier in their marriage.

“Initially, I wasn’t sure how people, my fans especially, might take it,” Jackson said. “I told Denise, ‘They’re going to think I’m a bad guy or something.’ But the book was honest and it told how things have all changed and are different now. It told the good as well as the bad.”

And that’s something Jackson, the songwriter, can probably appreciate.