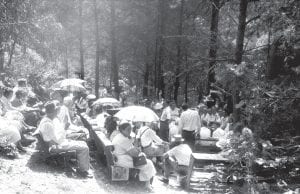 Alan Lomax recorded this gathering in Blackey in the early 1960s.

Over the course of 50 years, from 1933 to 1983, pioneering folklorist Alan Lomax collected some 60 hours of recordings in or relating to the Commonwealth of Kentucky — ballads, lyrics, banjo breakdowns, fiddle tunes, religious material, children’s games, topical songs, and oral history. In 2015, Lomax’s centennial year, the Alan Lomax Archive of the Association for Cultural Equity and the American Folklife Center at the Library of Congress are collaborating with a variety of Kentucky institutions to return the Lomax collections to the people of the Commonwealth.

Appalshop, with support from the National Endowment for the Arts, will host the Lomax material and conduct a series of public programming and activities across the region that celebrate both the material that Alan Lomax collected and the communities and traditions he documented. These events will include performances of Lomax material by contemporary artists, collecting of stories from descendants and neighbors of people Lomax recorded, and public forums with noted scholars and folklorists.

The Alan Lomax Kentucky Repatriation Initiative kicks off this year on June 5 and 6 during Appalshop’s 29th annual “Seedtime on the Cumberland Festival,” which will feature a round-robin performance by young Kentucky musicians interpreting songs from across the five decades of Lomax’s Kentucky recordings, as well as archival media screenings from the Alan Lomax Collection at the American Folklife Center and the Appalshop Archive.

The Seedtime on the Cumberland round-robin performance will feature the following artists:

• Sam Gleaves is a folk-singer and songwriter from Wytheville, Virginia. Gleaves earned a degree in Folklore from Berea College and preserves mountain culture in performance and documentary media.

• Kevin Howard is a singer, banjo player, and guitarist from McRoberts. His repertoire is comprised of old-time music, hymns, and the banjo ballads.

• Bonnie ‘Prince’ Billy is a moniker used by Louisville musician Will Oldham. makes music out of Louisville, Kentucky, and has done so for a number of years. Oldham co-starred in the film “Matewan” as a boy, and was in Whitesburg for the film’s Appalachian debut at the Whitesburg Cinema.

• Karly Dawn Milner from Rowan County sings, writes and plays guitar and banjo with her band KarlyDawn & The HillFolk and has appeared at Merlefest, the Berea Celebration of Traditional Music, Seedtime on the Cumberland, the Carter Family Fold, the Old Town School of Folk Music in Chicago, and on Kentucky’s Red Barn Radio.

• Brett Ratliff is a musician who grew up in Van Lear in Floyd County. As a youngster, Ratliff sang in church and sang along to recordings of Loretta Lynn and Hank Williams. As a teenager he began playing guitar for bluegrass bands. He later learned banjo tunes and ballads from some of the masters of old time music.

• Nathan Salsburg is a Grammy nominated producer, archivist, writer, and guitarist, and Curator of the Alan Lomax Archive.

Persons wishing for information on this weekend’s event at Appalshop may call 633-0108.