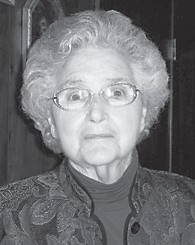 Born in Bakewell, Tenn., she was a daughter of the late William Preston and Sarah Jane Riner Suggs. She lived in McRoberts until she turned 14.

Funeral services were held July 27 in Pound, Va. Burial was in the Whittaker Cemetery on Mill Creek at Pound, Va.