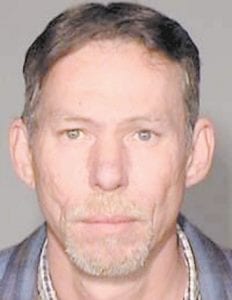 A convicted sex offender who was arrested in Whitesburg last week is expected to appear in court Thursday to declare whether he will fight extradition to California, where he stands convicted of raping a woman by force or fear.

Larry Daniel Humphrey, 50, of Fresno, Calif., has held without bond in the Letcher County Jail since he was arrested near Walmart in Ermine on the afternoon of January 25. He is scheduled for arraignment at 1 p.m. on January 31 in Letcher District Court.

Humphrey was arrested last Friday after staff members at the Refl ections salon, located in the same shopping plaza as Walmart, alerted authorities about his behavior.

Humphrey walked into Reflec tions seeking a haircut for a nine-year-old boy who was wearing a girl’s coat with pink stars on it, out-grown Spider-Man pajamas, pink socks and girl’s shoes.

“It was strange as soon as they walked in,” said stylist Keisha James. “The little boy had a funny demeanor toward the man.”

“Quite a bit of modification was done to their hair and his beard,” said Letcher County Sheriff ’s Deputy Bert Slone. “They thought it was odd that this man was doing so much alterations to his hair.”

When James asked the boy his name, she couldn’t understand what he said at first. She said he then added, “but they call me Frank.”

The boy also didn’t know what grade he was in at school, said James.

“We just felt kind of weird,” said James. “We thought the little boy had been abducted because he was acting so weird.”

When Donna Ison Watts, owner of Reflections, asked the boy if he needed help, he looked down at the floor and didn’t say anything. Watts quietly walked to a nearby business and called her husband, Mike Watts, who works with delinquent youth in Letcher District Court. Mr. Watts then alerted local and state police.

Mrs. Watts said she is grateful the shop wasn’t too busy to accept Humphrey and the boy as walk-in clients.

“ Thank God we were slow and the Lord sent him to our shop,” said Watts. “If you know about abuse and don’t report it, I think you are as guilty as the person who did it. We need to help these children.”

James said a hair stylist washed Humphrey’s hair in an effort to stall Humphrey from leaving the shop in order to give police a chance to get there.

“It was amazing that it worked out that way,” said Mrs. Watts. “I want to thank (police) for being on top of it.”

Slone said Humphrey’s wife, Michelle, and three other children were washing clothes at the Wash Board Coin Laundry while Humphrey and the boy were getting their hair cut. They had been staying at the Super 8 Motel in West Whitesburg.

“They were trying to find a secluded, isolated place away from California,” said Deputy Slone. “They had been traveling for about two weeks.”

Police confiscated a Toshiba laptop computer from the mother. The computer will be taken to a crime lab to be analyzed, Slone said.

“We are concerned that there may be violation against the children,” said Slone. “The investigation is ongoing between the sheriff ’s department and social services, which may help bring criminal charges against Humphrey.”

The four children were placed in the custody of social services, where they remained after a court hearing on Tuesday.

The father of the four children, Frank Bybee of Oilton, Oklahoma, arrived in Whitesburg on Monday after being contacted by Michelle Humphrey, to whom Bybee was married before she left him and the four children — ages 5, 6, 8 and 9 — in 2008. Bybee will continue his fight to gain custody of the children at a court hearing scheduled here on February 26.

Heidi Wi t t, Bybee’s daughter and half-sister to the children, said Michelle Humphrey married Larry Humphrey about two years ago, but told her father his name was Larry Brown. She said the Humphreys were eventually granted custody of the four children through the courts in South Lake Tahoe, Calif.

“My dad tried to look him up to make sure he was safe and not a sex offender, but he found nothing,” Witt said. “My dad has spent the last year trying to get hold of his children, but he would get no answer or disconnected numbers. It was literally sending him into depression.

“He cried on their birthdays and at Christmas,” Witt added. “He would send them gifts, but never heard whether they got them or not. He knew something was wrong. He kept saying, ‘I hope the kids are okay.’”

Witt said her father is disappointed he isn’t returning to Oklahoma, where she also lives, with the children.

“My dad saved his money for so long to get a goodrunning vehicle and he just had to spend every dime he had on going to Whitesburg,” she said.

Witt said she and her family “are so thankful to the women at Reflections” for taking the action that resulted in her father learning where his children were.

According to a website concerning sex offenders that is sponsored by the state of California — www.meganslaw.ca.gov — Humphrey, who stands 6-1 and weighs 180 pounds, was convicted for violating Section 261 (a)(2) of the California Penal Code. According to the site, Humphrey committed an act of sexual intercourse with a person not his spouse against her will by means of force, violence, duress, menace, or fear of immediate and unlawful bodily injury on the person.