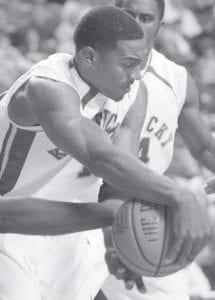 Legion informed coach Billy Gillispie of his decision Monday night, the school said in a statement.

“It’s unfortunate and not what I wanted to hear, but I understand,” Gillispie said in the statement.

He said Legion and has mother had approached him last Friday, November 30 about a transfer but that he believed Legion had later changed his mind. In Saturday’s loss to North Carolina, Legion remained on the bench the entire first half, despite the fans chanting his name. He also didn’t participate in team practices Monday, Gillispie said.

“You always hate to lose a valued member of your program, and Alex was definitely that,” Gillispie said. “He has tremendous potential as a player and a student, but most importantly, he is a wonderful young man. We hate to see him leave, but if he can be happier elsewhere then all you can do is wish him the best.”

Legion, Gillispie’s first recruit at Kentucky and one of two highly touted Wildcat freshmen along with power forward Patrick Patterson, is averaging 7 points this season. The Inkster, Mich., native has played in all six Kentucky games, starting twice.